Interns reflect on a year in San Francisco national parks 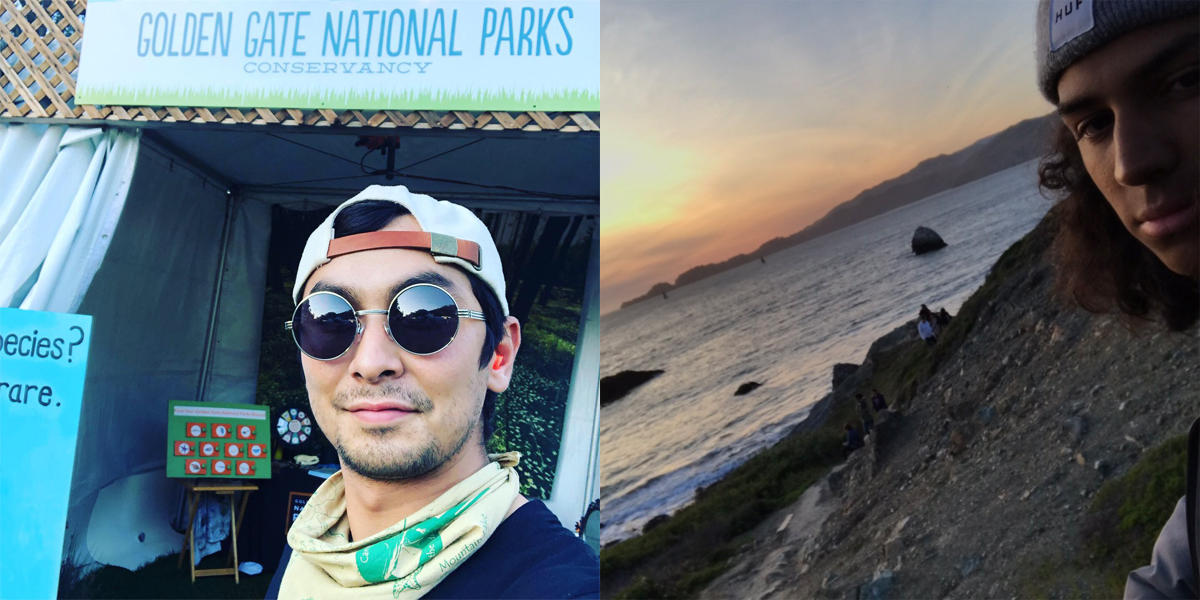 San Francisco Park Stewardship interns have a unique opportunity to spend months in the Golden Gate National Parks, helping to lead volunteer programs, connecting with people throughout the parks, and learning how to steward our lands in real ways.

Our three interns for the 2018-2019 season had a chance to sit down and reflect on their time in the parks. Think you might want to become an intern or know somebody who might? Check out our internships page for more information.

I've learned that every place has a history and even the ugliest histories can exist aside the most beautiful. I've learned what Rumsen Ohlone kindness looks like – and it tastes like fresh tortillas given without expectation of return. I've learned to love the redtail of a raptor as much as the scaly tail of a fish. I've learned that sunset at Lands End will make your heart sing and that summer can be the coldest season. I've learned where coyotes den, where wallflowers grow, and where bats play. I've learned to identify plants in the dark at Fort Funston and how to hold a lizard with your bare hands. I've learned that an Indian woman can make a name for herself in environmental work and how hard we have to work to represent ourselves. I've learned how to be a bear in Yosemite and how 20 students can become "my kids" in just four days. I've learned the likes and dislikes, the pain and the laughter of volunteers until suddenly they were friends.

I've learned that trucks have personalities and that baby elephant seals in Point Reyes can scream. I've learned that I have a favorite flower—the Harlequin Lotus—and that I could celebrate family traditions with a new community and feel just as warm. I’ve learned that Berkeley isn’t so far away after all and that a clear day on Hawk Hill is a rare treasure and a spectacular sight. I've learned the cry of a baby hawk and watched them grow until they were my own children and learned the secret lives of trees in Muir Woods. I've learned that the Pacific is cold, the redwoods tall and the city small.

I've learned to see the contours of Lands End, feel the wind of the Bluffs, and smell the sand at Fort Funston. I've learned that these parks are home and that sometimes the person that can make you laugh the hardest is the quiet one sitting right next to you. I've learned solitude, until one day I looked up at the colorful rooms and chaos of building 34 and the navy blue and openness of 1216 and found family.

I've learned that work doesn’t feel like work when you’re doing something you love and that is the lesson I will carry with me for a lifetime.

“I remember learning how to dive
I just had to go
to the end of the board
and distract myself
and go ‘whee! what now?’
I just had to jump
you just have to jump
and touch the water
with the ends of your fingers.”

These lyrics swam around my mind for the majority of last year’s summer season. The end of the month of June was quickly approaching, and I was in the middle of making one of the most important decisions of my life.

I had just been offered the opportunity to work as a Park Stewardship intern for the Golden Gate National Parks Conservancy, and I was given a little over a week to make my mind up. It was all really scary and exciting for me at the same time. I was scared because accepting the offer would mean that this would be the farthest I had ever been away from home, and for the longest amount of time as well. I knew close to nothing about San Francisco, and I had no family or friends on the West Coast. But I was excited because these would be the first steps I would take towards working in the environmental field, and it would give me the chance to experience living somewhere other than Florida for once in my life.

Those lyrics echoed in my mind over and over during the whole decision-making process, and eventually, I learned to dive.

I arrived in San Francisco later that year, during the last week of September. For the first few months of the internship, I began to familiarize myself with some of the local flora and fauna. I pushed myself out of my comfort zone and began leading groups of volunteers to work on restoration projects in some of the most breathtaking natural lands in the state of California, and I had the opportunity to work and make friends with some of the most unique, loving, and beautiful souls.

As the end of the year approached, my fellow interns and I faced a few tough challenges. Wildfires to the north and south of us made working outside unsafe, and as a result, many of our weekly restoration programs were unfortunately canceled. Following the fires, we also came back from holiday break to find that the government had been temporarily shut down. What we thought would just be a few days of not being able to work turned into the longest government shutdown in the history of the United States. During this time, many interns were not permitted to work outdoors, and many of us turned to volunteering with other parks like the San Francisco Botanical Garden to stay busy.

But the challenges we faced were nothing compared to the unforgettable experiences I had during the rest of my time in San Francisco. As an intern here, I drew inspiration from all the different species of fungi, beautiful sunsets, bellowing foghorns, wildflowers, wildlife and people I encountered. I learned all about the history of the national parks and I learned how to take care of them using the information passed down to us by the native people of these lands over many generations. I became more comfortable and confident in my public speaking, and communicating my thoughts and ideas to people who may not have had experiences similar to mine. But most importantly, I had fallen in love.

The Bay Area has helped me grow in so many different ways. a lot of which I couldn't put into words right now even if I tried. So I'll say this instead:

To all my co-interns and team members who I now consider my friends and family, to all the staff who served as the most amazing mentors and guiding lights in my life, and to all the community members and volunteers who showed me that I will always have a place here in San Francisco to call my home: I love you all so, so much. Although the next chapter in my life may not involve me sticking around the Bay Area, I will always carry the warmth that you've all shared with me wherever I go. I will never forget you and all the incredible times we've spent together, and I hope to come by and visit sometime very soon.

San Francisco has always been a Gershwin “Rhapsody In Blue” daydream for me, full of color, crescendos of noise and movement. Yet I have always maintained this idea that, despite the turmoil of day-to-day Bay Area life, this turmoil and ever-present collective need to be better allows the free flow of thoughts and differing opinions. This creates a myriad of individual communities, each one more unique than the last. This mystique and glamour of San Francisco is what initially brought me to my ultimate decision to study here, as well as the fact that San Francisco State University was just far enough away from my home to be adventurous yet close enough to visit when I feel homesick.

Through my studies at SFSU I had the fortune to participate in a class that facilitates learning about Environmental Studies by participating and volunteering in service learning projects throughout the Bay Area. That led me to meet Yakuta and her team at their Lands End Saturday-morning program. We spent the majority of the time pulling albizia plant from the sand dunes where I had my first encounter with my future coworker Gabriel. For the better part of half an hour we scoured the sand from the base of a large invasive tree that was about three feet tall and maybe three inches thick. We pulled until a loud pop-crack was heard, and we knew we had lost the battle as the plant was still in the ground. This was one of many battles I would face with Gabriel and Jainita. Throughout the months in this internship our team developed a strong bond and it showed not only in our work but in our office spaces and time between projects. Working with Yakuta, Jainita, and Gabriel I felt as though we were always supported and could conquer any problem nature threw our way.

Over the months, from February 2 until September 27, I have had numerous opportunities that I had not expected to be able to participate in, not only my internship but my lifetime. I had never expected to be catching fish with a net in Redwood Creek at Muir Woods, or hand-cutting Douglas fir trees with the Amah Mutsun tribe as we blessed the saplings with sacred tobacco. I never would've thought I would meet Greg Moore, the CEO Emeritus & Special Advisor to the Golden Gate National Parks Conservancy, and have him recognize me during a wildflower walk I was facilitating at the Presidio Coastal Bluffs. There were many more important and wholesome figures who impacted my internship in the best ways imaginable. All my mentors who have helped my development as a steward of our natural areas made sure I had all the tools to accomplish my goals and the job that was expected of me. I have had numerous opportunities to learn about the environment, nature, weather, interpretation, history, and how to better hold programs that strive to be as diverse, equitable, and inclusive as possible, as well as other trainings and opportunities to learn.

The highlight of my internship was having the opportunity to visit Yosemite with Gabriel and Jainita, facilitating a trip with our Linking Individuals to Their Natural Community (LINC) youth. We hiked the Nevada Falls and Mist Trail, we jumped in the Merced River, told stories around the campfire, cooked and ate meals together, and developed relationships that lasted outside our trip to Yosemite. I will always be thankful for the relationships and the time I have spent as a part of the Conservancy family. Thank you, everyone, for such a great experience and I hope to see you all on the trail soon!