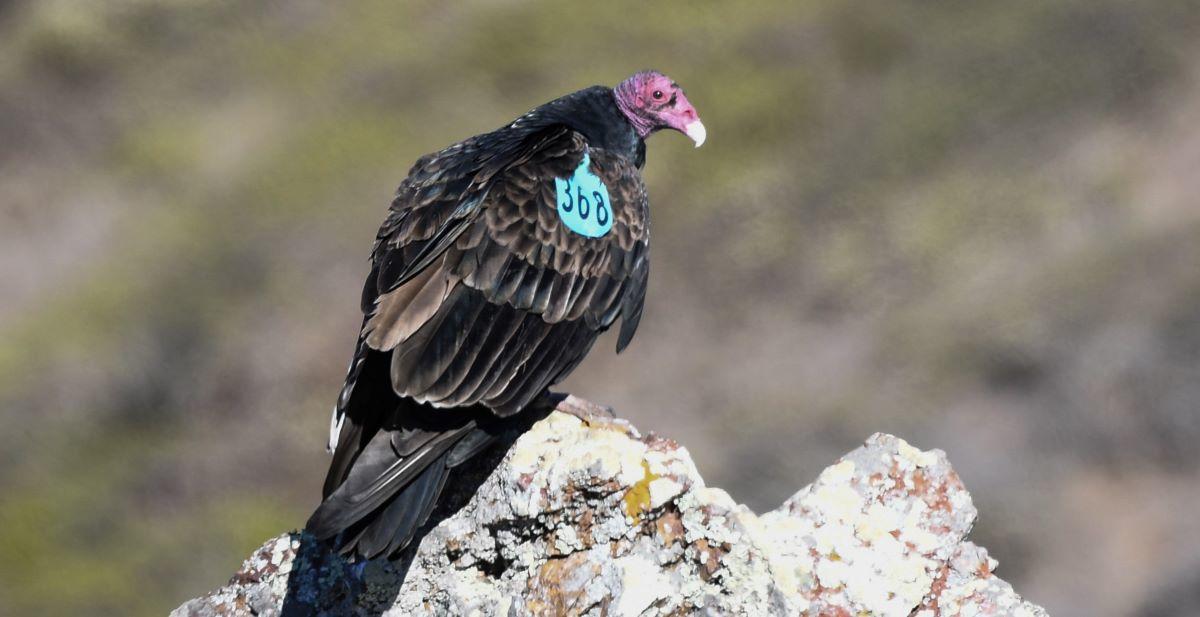 I have always loved Turkey Vultures. It all started when I met Toulouse, the Turkey Vulture, when I was a volunteer at the Animal Resource Center at the San Francisco Zoo. As a GGRO Intern in 2008, I watched the Turkey Vultures do their wobbly, effortless soaring around Hawk Hill. One day on the Hill, someone said to me, “You will get tired of watching Turkey Vultures when you go to Veracruz.” Well, that person was wrong. My experience in Mexico, watching thousands of vultures on migration, only increased my love for vultures. Incidentally, in Mexico, Turkey Vultures are called “Zopilotes.”

When I heard Chris Briggs, former GGRO Research Director, was starting a Turkey Vulture research project at GGRO, I was ecstatic. This project was one of the (many) reasons why I applied for the GGRO banding manager job and wanted to come back. Chris did the hard part; he set up the initial proposals, permits, and the first International Animal Care and Use Committee (IACUC) approvals, so I was able to walk into a project that was nearly good to go. However, vultures are surprisingly tricky to catch and a lot of patience is needed. After a bit of a learning curve and still no vultures caught, I decided to change the method we were using. We built a walk-in trap. I spent a few days in southern California with raptor biologist and trapping expert Pete Bloom to learn about his walk-in trap and how to wing-tag vultures. The walk-in trap is essentially a modified dog-run where the entry door has been altered so that a vulture can walk in, but it won’t be able to walk out. And of course, the trap is baited with carcasses.

WHY STUDY VULTURES IN THE FIRST PLACE?

Turkey Vultures are the best avian decomposers we have in North America. Vultures can eat an animal that has died from anthrax or cholera. They will not contract botulism, rabies, or salmonella from carcasses because they have excellent immune systems. Their gastric juices are highly acidic and strong enough to kill most bacteria (with a pH of almost 0). And vultures poop on their feet. Why?

Vulture feces are also highly acidic and can kill bacteria that have made their way onto their legs, but they also sterilize the area around the rotting carcass to help stop diseases from spreading. We do not band vultures like we band raptors because if a band were placed on a vulture, the excrement would build up and possibly impede the blood supply. So instead we place a patagial marker, also called a wing-tag, similar to that on California Condors. This tag can be read while the vulture is flying or perched.

Turkey Vultures scavenge on rotting meat, so they are likely to be exposed to whatever toxins are in our environment such as lead, other metals, and rodenticides. Unfortunately, rodenticides are used throughout California. One of our research goals is to find out if these birds are being exposed to rat poisons and what the level of exposure is.

One of the most common questions on Hawk Hill is, “How do you know you aren’t counting the same bird twice?” Our second research goal is to help answer this question by tagging the vultures and to learn more about movement ecology. Do these birds hang around the Marin Headlands throughout the year or just part of the year? Are they migrating to Veracruz, Mexico? We hope to answer some of these questions by placing patagial tags on the vultures, by using GSM transmitters, and by collecting blood samples for later analysis.

Click here to read the full article in Pacific Raptor 39.

Have you spotted a Turkey Vulture with a blue tag like the one pictured above? If so, please contribute to this research project by reporting your sighting here.

Teresa Ely was a GGRO Intern in 2008. She completed her Master’s degree in Biology at the University of Nebraska, Lincoln, studying American Kestrel biology, before returning to GGRO as Banding Manager in 2016.