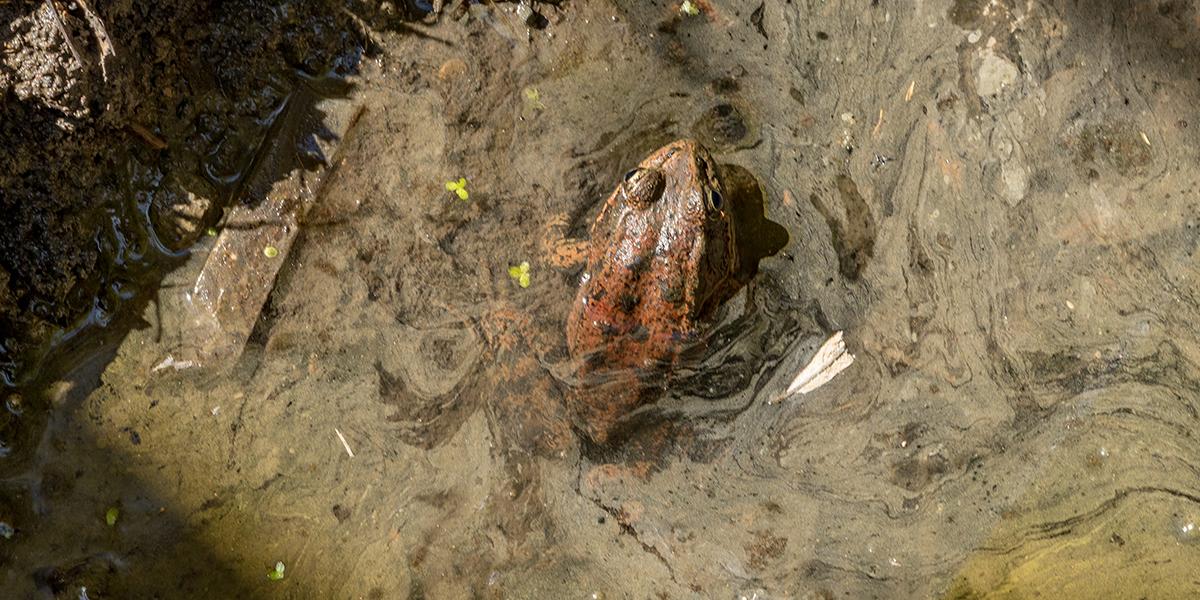 In the past, over 80,000 red-legged frogs were harvested annually for their legs. Currently, while exact numbers are unknown, only three localities are known to support substantial (over 350) populations of adult frogs.

The abdomen and hind legs of adults are red; the backs are characterized by small black flecks and larger irregular dark blotches with indistinct outlines on a brown, gray, olive, or reddish background color. Dorsal spots usually have light centers. Skin folds across the back are common. In their tadpole stage, the frogs are dark brown and yellow with darker spots.

With some individuals growing to be over 5 inches long, the California red-legged frog is one of the West’s largest native frogs. Females grow larger than males. The larvae range from .6 to 3.1 inches.

Eggs are laid, which hatch in 6 to 14 days. Larvae (tadpoles) undergo metamorphosis in 3.5 to 7 months. Sexual maturity is attained at around 3 to 4 years of age. California red-legged frogs may live 8 to 10 years.

The diet of California red-legged frogs is extremely variable. Invertebrates, small tree frogs and mammals are eaten by adults, while larvae are thought to feed on algae.

California red-legged frogs have paired vocal sacks, and usually call into the air.

In general, adult frogs are quite wary. Highly nocturnal, they come under attack from wading birds. Adult frogs seem to use vibrations transmitted along the vegetation on which they are sitting to detect the approach of certain other predators, such as raccoons. They also sometimes fall prey to San Francisco garter snakes and two-striped garter snakes, with which they share certain habitat. During periods of flooding, California red-legged frogs have been observed concealed in small pockets or mammal burrows along river banks, stabilized by shrubby riparian growth.

California red-legged frogs breed early in the year, from late November to late April. Males appear at breeding sites typically 2-4 weeks ahead of females, and call in small mobile groups of between 3 and 7 to attract females. Egg masses containing an average of 2,000 small (.1 inches in diameter), dark, reddish-brown eggs are attached to vegetation in or near the water, such as bulrushes or cattails.

Endangered Species Act; Species of special concern in the state of California. California also reaffirmed its commitment to protect the California red-legged frog by designating it as the official state amphibian in 2014.

The Golden Gate National Parks Conservancy has worked to restore wetland habitat at Milagra Ridge and Mori Point in San Mateo County. The Conservancy’s Park Stewardship Program monitors California red-legged frog egg masses at ponds across both sites to confirm frog presence or absence and to understand trends in the winter-breeding frog population. In addition, California red-legged frogs were reintroduced to the the lower Redwood Creek Watershed in 2010-2011, where monitoring indicates that they are benefitting from the Conservancy’s extensive, ongoing restoration work. 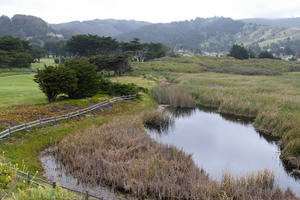 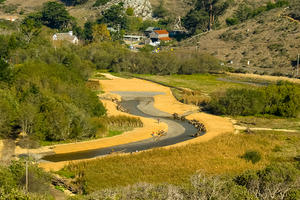