If you’ve been bitten by the bird bug while strolling through the Presidio, picnicking at Crissy Field, or hiking the Marin Headlands, you’re in good company—scientists, birders, volunteers, and casual observers have long admired the Golden Gate National Parks for the diversity of birds that appear in its many habitats.

At the Golden Gate Raptor Observatory (a Parks Conservancy program in cooperation with the National Park Service), about 300 volunteers focus their passion for birds by documenting the passage of birds of prey over Hawk Hill. Located in the Marin Headlands, this is the best spot on the West Coast for observing the fall migration of hawks, falcons, eagles, and vultures.

Our volunteers are definitely raptor-obsessed, but they also find working as citizen scientists for the GGRO to be a valuable way to meet new people, engage in cutting-edge research, and spend meaningful time in some stunning national parklands. 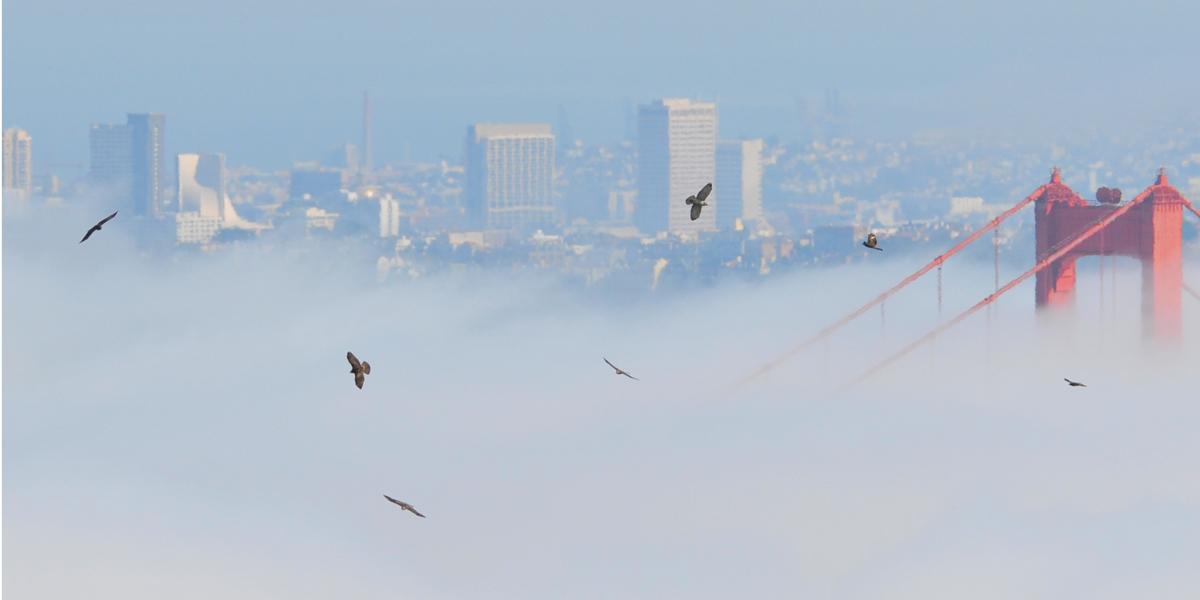 Hawks fill the skies above the Marin Headlands. George Eade

The GGRO recruits new volunteers each year, including this spring! All volunteers receive extensive training in raptor identification, and banding volunteers learn banding techniques from trained scientists and staff.

As we approach our volunteer recruitment period, we sat down with some of our volunteers to ask them why they love working with the GGRO. We’ll let them speak for themselves:

GGRO: How has your view of raptors changed since you began volunteering?

Steve Rock, Bander, 18 years
When I first started, I knew nothing about hawks other than that they were cool. I used to do a lot of paragliding, in which I flew with hawks, “thermal-ed” with hawks. And it was magical. Accipiters, not so much—I wouldn’t have known one if it had hit me in the head. So my view of hawks has expanded to include things like Merlins and Sharpshins, and things that go “flap-flap.”

Mary Kenney, Hawkwatcher, 22 years
To find out how many species we had just right in our own neighborhood was eye-opening. I can look up from my backyard, or as I’m driving along—keeping one eye on the road of course—and hawks are everywhere. 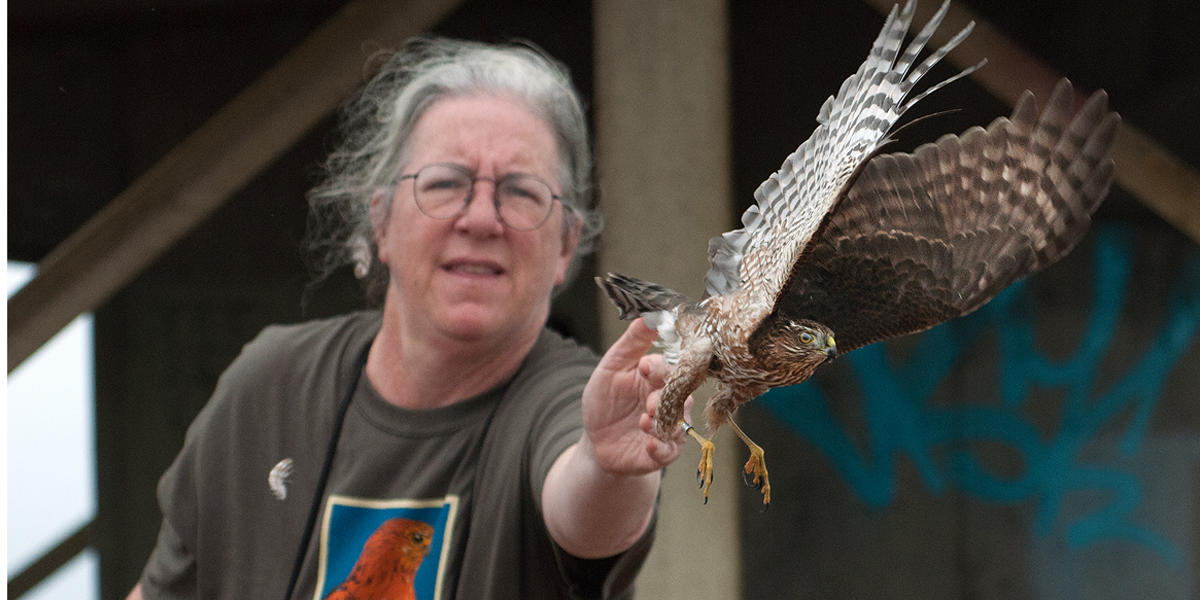 GGRO: How has your view of science evolved since you began volunteering?

Natasha Lekach, Intern, 1 year
I’ve learned that science is more accessible than it is typically presented to be. I think a lot of people see science as this big, scary thing that is hard to understand, and that you’re either a scientist or you’re not. GGRO creates this world where that divide doesn’t exist.

Christine Cariño, Bander & Hawkwatcher, 11 years (with a 16 year break in the middle!)
My view of science from a citizen perspective has changed—that citizens can contribute to science in a meaningful and significant way, whereas I think when I started, I would say only scientists can contribute in a meaningful and significant way.

Siobhan Ruck, Bander, 23 years
When I started with this program, I was in art school. A couple of years of being out here and seeing the amazing amount of new things that you could learn every day made me say, “Wow, I should have gone to school for biology!” 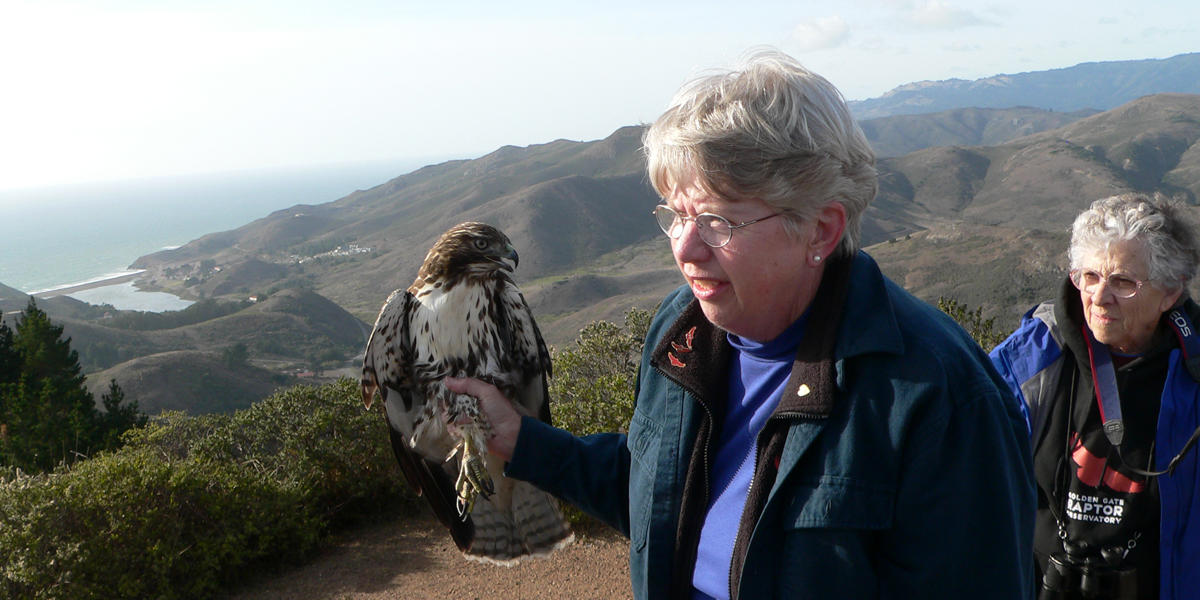 GGRO: Can you describe some of the relationships you’ve developed at GGRO?

John Farnsworth, Hawkwatcher, 3 years
When I first started, it was all about the birds. They’re so spectacular, and they still are. There’s nothing more beautiful than being on the top of the Hill and seeing a bird soaring. But after a while, it was more about my team. I spend the whole winter kind of missing them, and that experience. I’m ready to get back in August and get it going again.

Mary Kenney, Hawkwatcher, 22 years
Several people on my team have been there 10 years or more. These days, we not only get together on the Hill, but we get together to bird watch and to go hawkwatching at other places in the area, at other times of the year. My group really has become one of my families.

Marion Weeks, Bander, 24 years
You look forward to coming and having experiences that make you ecstatic—not only for yourself, but for another person, to see them enjoy what you’re so passionate about.

GGRO: What do raptors mean to you?

Candace Davenport, Bander, 10 years
I never was a raptor person until I watched a Peregrine pair online in San Francisco; they nested in the PG&E building. I was in my late 50s at the time, and never really had a passion. And all of a sudden, there were these birds.

Eileen Richey, Hawkwatcher, 10 years
Raptors mean the wilderness, the wild part of the Bay Area. It’s nice to know that in the midst of this huge metropolitan area full of traffic and people and all kinds of other things, there is actually a migration going on that’s been going on, probably for millennia.

Want to join the GGRO as a hawkwatcher or bander for our 32nd official migration season, this fall? Find more information about how to volunteer from our website, or at one of our upcoming recruitment meetings (attendance is strongly encouraged for prospective volunteers):

Editor’s note: Interviews have been edited and condensed for space considerations.