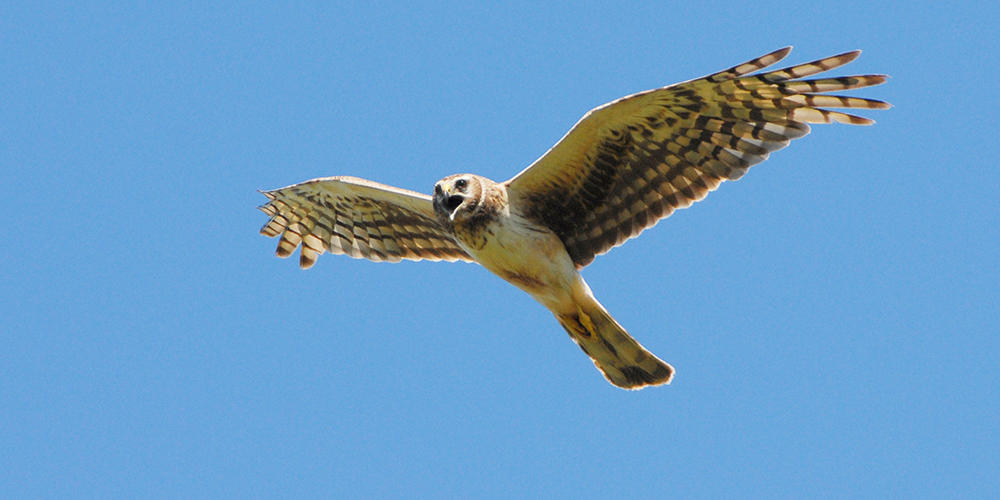 “Harrier!” exclaimed my co-intern, Heather, pointing at a hawk skimming down the hillside.

I looked up as it passed, its long wings carrying it on an unwavering glide. I had no idea how to identify this raptor. “It has that patch of white at the base of its tail, just like we learned,” Heather added cheerfully.

It was at this moment, only a few days into my internship at the Golden Gate Raptor Observatory (GGRO), that I realized how difficult it was to translate the field marks I’d been memorizing into an ability to distinguish live hawks in flight.

I had just taken a break from poring over pictures and books on raptor identification when this pop quiz flew by and bewildered me. There were four Northern Harriers—juveniles, distinguished by their pumpkin colored chests. They were playing, making spirited squawks as they chased each other up and down the slope of Hill 88 in the Marin Headlands. My disconcertion gave way to simple captivation by these strange and beautiful birds.

I continued to be mystified by harriers from that day on, though the nature of my bewilderment changed. GGRO’s fall migration season began to fly by, and after dozens of hours of hawkwatching, I finally started to feel competent in raptor identification.

As for Northern Harriers, I not only knew their field marks, but also that they tend to cruise just feet from the ground, because unlike most other diurnal raptors that hunt primarily by sight, harriers locate their prey mainly by sound. I knew that their owl-like facial-disks funnel the sounds of potential prey into their offset ears.

Despite all that knowledge, however, it was the harrier—again—that would shake my confidence.

It was just a few days after I’d proudly brandished my knowledge of raptors by presenting an educational “Hawk Talk” program when I spotted a strange, pale gray raptor. “Um, Osprey? No, what is that?” I stumbled embarrassedly. A fellow hawkwatcher answered: “Adult male Harrier!”

So that was my first look at a “gray ghost”—a dusky bird that bears little resemblance to the juvenile harriers that frequent Hawk Hill. I modestly remembered that I still had an infinite amount to learn.

Three months into my internship I had decided that Northern Harriers—despite their tendency to unnerve me—were my favorite raptor species. So I set my heart on banding one.

Unfortunately, harriers seemed better at avoiding capture than any other raptor species. I would sit in a GGRO banding blind, watching harriers unassumingly pass within yards of our nets. My heart would race when one banked and twisted in the air, as though it might turn into a net—only for it to drift away.

After a long day of such encounters, I went to Buzz Hull, GGRO’s research director who had banded countless harriers. I told him incredulously that I had decided harriers were not normal raptors but rather mythical beasts, evolved to taunt me—so close, so beautiful, always barely out of reach. Buzz grinned knowingly.

A few weeks later I found myself extracting a harrier from a net and looking at its strange, straw-colored plumage perplexedly. I called Buzz over the radio and described the bird that distinctly lacked the juvenile’s pumpkin hue. “Congratulations, you have the third adult female harrier ever caught at the GGRO,” he said warmly.

As spring nears and the end of my internship looms, I am anticipating one more surprise from the Northern Harrier (though I imagine there are a few more I can’t predict). I hope I’ll have a chance to witness the harriers’ famed “sky dance,” a courtship ritual in which the birds make fantastical loops in the air.

If history is any indicator, I suspect it will take a while for me to finally find a dancing harrier, but with some persistence I’ll be rewarded.