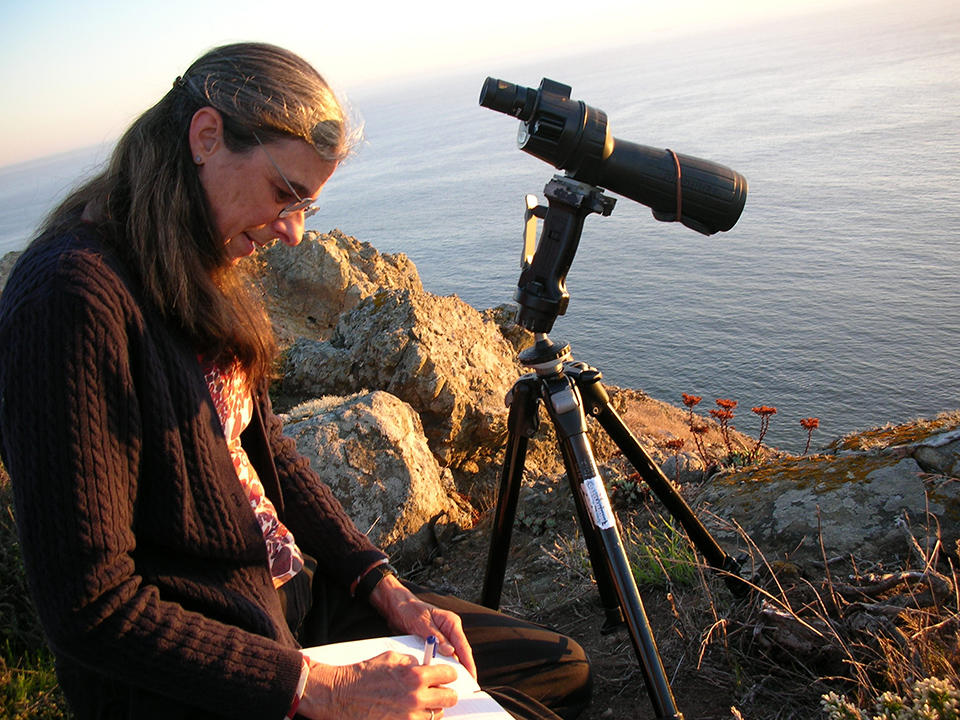 Dr. Allen may spend less time out collecting data these days, but she still loves any opportunity for fieldwork that she gets. "My heart wants to be outside," she says.

Dr. Sarah Allen's research on seabirds and marine mammals has brought her as far as Antarctica, but most of her career has been as a science advisor to the National Park Service. Sarah currently works as a research coordinator for the entire Pacific West region of the National Park Service, matching promising, early-career scientists in the UC system with park science needs. She received her Ph.D. from the University of California, Berkeley at a time when few women were pursuing advanced degrees in the sciences, and has authored over 100 publications.

Sarah is passionate about using science to inform the public and guide land management decisions, particularly as concerns about our changing environment continue to emerge. Her work has addressed a wide range of important resource issues. We celebrate Sarah and her accomplishments!

The Spark of an Impactful Career in Conservation Biology

“My interest started as a child. When we spend time in nature as children, it’s easy to be in awe of what we see; to feel the wonder of it all. My focus was the marine system, especially birds and mammals. I was lucky in that I had mentors that encouraged me and showed me how to make my interest into a career (One of Sarah’s mentors was Starker Leopold, son of conservationist Aldo Leopold.) Now I want to give back to the next generation. I put all of my energy into creating clear pathways for them to pursue science.”

“These days, I’m doing more coordination of research in the parks rather than conducting research myself. I look for opportunities to elevate the availability of science for the region, and leverage scientists in the UC system to come and work in National Parks. If a park has a need, I help them work through the university pathways to fill that need with the right scientist."

"I began my career with the National Parks in 1993, just as the long-term scientific monitoring program was getting started, and before it was funded. I became a wildlife biologist for Point Reyes National Seashore in 1995, switched to a park science advisor role, and was eventually also assigned as the acting San Francisco Bay Area Network Inventory & Monitoring program coordinator. Soon after, I had the opportunity to spend two winter field seasons in Antarctica."

Lessons from Studying Penguins in Antarctica

“My previous experience using radio telemetry and GIS helped me land a spot on a research team lead by a colleague on a National Science Foundation grant. I took a leave of absence from the park service and spent a couple of months in Antarctica, mostly in a tent near the penguin colonies.

“Penguins are like a bellwether of changing climate because they are closely linked to pack-ice. At the time there was an iceberg that had broken loose, and it appeared that their foraging was changing in response to this event and the changing climate. We were looking at the penguins not just to study penguins, but to learn about the arctic ecosystem as a whole and how it might be changing.

“The scale of Antarctica helped me realize that I was a ‘sesame seed on the rye bread of life’: I saw how small humans are on the larger landscape. But we have a big footprint. As conservationists, we look at how that footprint is manifested. We look at multiple things to see how they tell a story.

“There was more than 40 years of monitoring data for those penguins. That data eventually played a role in the creation of a Marine Protected Area for the Ross Sea, one of the last seas on Earth that remains relatively unaffected by human activities.

“To me, those developments demonstrated how powerful long-term data sets can be for informing policy and conservation. My experiences in Antarctica energized me to advance long-term monitoring back at home in the Bay Area. I worked with the national office to get the Inventory and Monitoring program up and running. It was a team effort: I was just one cog in the wheel. By 1999, funding was approved.”

On the Intersection between People and Conservation Science

“Our mission to preserve and protect these resources for future generations puts us in a position where we are always on the edge: promoting conservation and also recreation can be challenging.

“The purpose of science is seeking the truth of how things function. But our knowledge of things is a process of understanding. It’s always evolving; it’s never fixed. What we know now is so much more advanced than what we knew even just five years ago. High school students are learning about DNA analysis. What will that be in 20 years? It’s hard to imagine. All we can do is provide the best science that we have now.”

Narrative adapted from an interview by Maritte O’Gallagher, April 2019.

Plight of the Pinnipeds: El Niño and Suffering Seals and Sea Lions 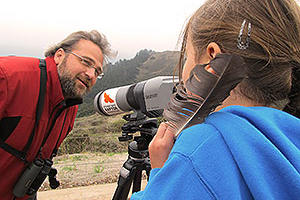 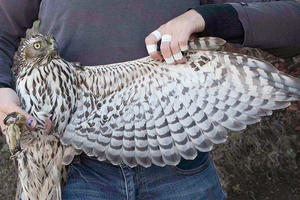