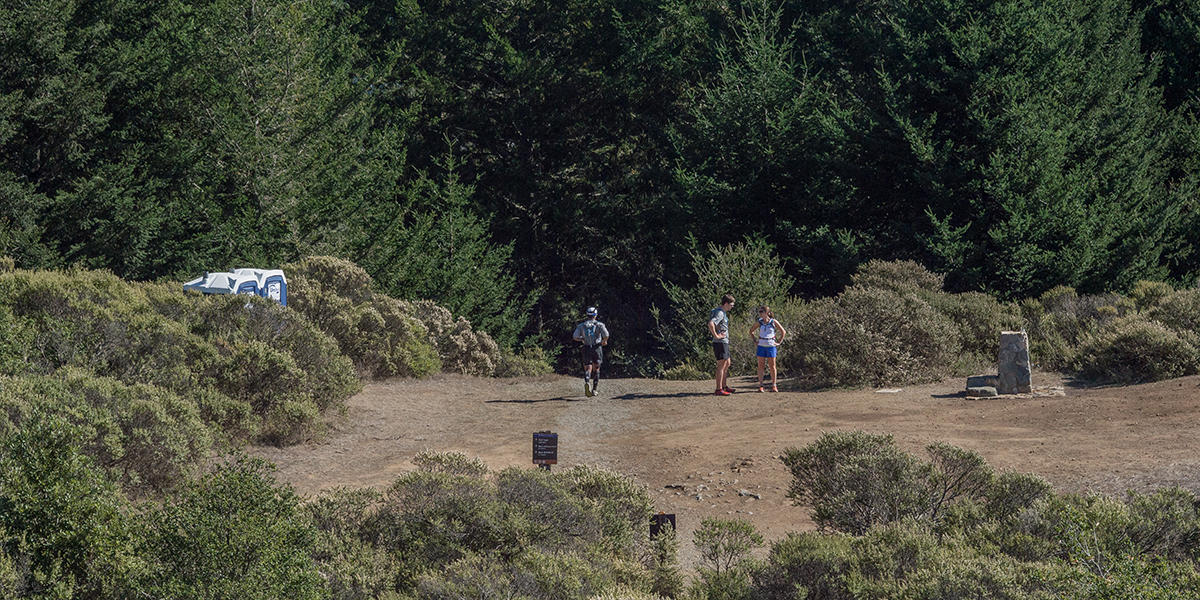 Most trail names are self-explanatory; they take their monikers from the area’s geographic features or natural resources. But some are a little more cryptic and obscure. In honor of National Trails Day, we did a little sleuthing into 10 mysterious trail names.

Agave Trail (Alcatraz)
Agave? On Alcatraz? Believe it. Only open in fall and winter (when Alcatraz birds are not nesting), this short but scenic trail on the southern end of the island is lined with, yup, Agave americana. These sharp-edged “century plants” were planted in the 1920s to control erosion, beautify the landscape, and serve as a formidable natural barrier for wandering inmates.

Baquiano Trail (Sweeney Ridge)
In Spanish, baquiano means “scout or guide”—an allusion to Sweeney Ridge’s prominent place in the early exploration of the San Francisco Bay. On November 2, 1769, members of a hunting party (the baquianos, perhaps?) attached to Gaspar de Portolà’s expedition climbed this hill to see “an immense arm of the sea” extend to the southeast. They were the first Europeans to see San Francisco Bay.

Bootjack Trail (Muir Woods)
What is a “boot jack?” Well, we’re glad you asked! A first-cousin of the shoehorn, the boot jack (or boot pull) is a leveraging device by which a booted individual can remove her boots without having to stoop down or even touch the boots!  Because the front part of the bootjack is a well-defined “U,” this tool’s distinctive form is sometimes used to describe geographic features. One speculates that this trail, at some point, took that shape.

Dipsea Trail (Mount Tamalpais)
This popular route, once called the Lone Tree Trail, takes its name from the legendary Dipsea Race. The country’s oldest trail race, with roots reaching back to 1904, shares its moniker with the Dipsea Inn, a hotel that opened during that same year near what is now called Stinson Beach. But where does “dipsea” come from? No one knows for sure. Its poetic allusions—if there were any—seem to have been lost to the beach sands of time.

Lishumsha Trail (Mori Point)
Mori Point is one of the last remaining enclaves for the endangered San Francisco garter snake—one of the rarest reptiles in North America. With our habitat restoration efforts focused on protecting this dazzling serpent (and its preferred prey, the threatened California red-legged frog), it’s only fitting that this trail take the name Lishumsha—a local Ohlone word for “garter snake.”

Lovers Lane (The Presidio)
This bucolic pathway is one of the oldest footpaths in the Presidio, as it traced the shortest pathway from the heart of the Spanish El Presidio to the burgeoning community of Yerba Buena, centered around the Mission. Naturally, this efficient route was later favored by American soldiers heading into San Francisco for rendezvous with loved ones. Today, the 19th-century footbridge, Georgian Revival architecture, and majestic groves can still charm your sweetheart.

Marincello Trail (Tennessee Valley)
Given this trail’s pastoral setting, it may be hard to believe that this thoroughfare was once slated to become the main boulevard into a planned community called Marincello. This 1960s-era project gained enough momentum that crews began work on a gateway and main street. Through grassroots activism, the development was halted. This trail, one of the last vestiges of that project, now takes visitors to wide open spaces that would have been paved over for apartment buildings.

Miramontes Trail (Phleger Estate)
This trail winds through the southernmost site in the Golden Gate National Parks. It’s named for Rancho Miramontes, a Mexican land grant (in present-day San Mateo County) given in 1841 to Juan Jose Candelario Miramontes, who served as a military officer in the Presidio of San Francisco. There, he married Maria Guadalupe Briones (sister of the famed businesswoman Juana Briones) and the couple became the first recorded residents of El Polín Spring!

SCA Trail (Marin Headlands)
No, this one’s not named after the reggae/calypso/punk fusion fad that peaked in the 1990s. SCA is the Student Conservation Association, an organization that engages young people in the hands-on stewardship activities for public lands all across America—including the Golden Gate National Parks. The tribute to Mighty Mighty Bosstones will have to wait. Someday, I suppose.

Slacker Trail (Marin Headlands)
This spur trail leads to the 930-foot summit of Slacker Ridge (aka Slacker Hill). Why this promontory in the Headlands is dubbed “Slacker” remains a mystery. Is it an ironic sobriquet, given that only the most enthusiastic go-getters dare tackle its steep grade? Or, is it an appellation derived from its slightly more antiquated definition (one who evades military service)—an allusion to the old Army post, Fort Baker, and many military installations nearby?