Top 10 Creepiest Critters in the Parks

Life is not all river otters and coyote pups. Some organisms in these national parks simply give us the heebie-jeebies—justifiably or not. With Halloween a few days away, here’s our list of the scariest and grossest creatures. For the squeamish, turn away. For the stout-hearted, read on—if you dare.

Find something gross in the parks? Feel free to post on the Conservancy’s Facebook page or Flickr page. We’ll try to help you identify the critter—as soon as we summon the courage. 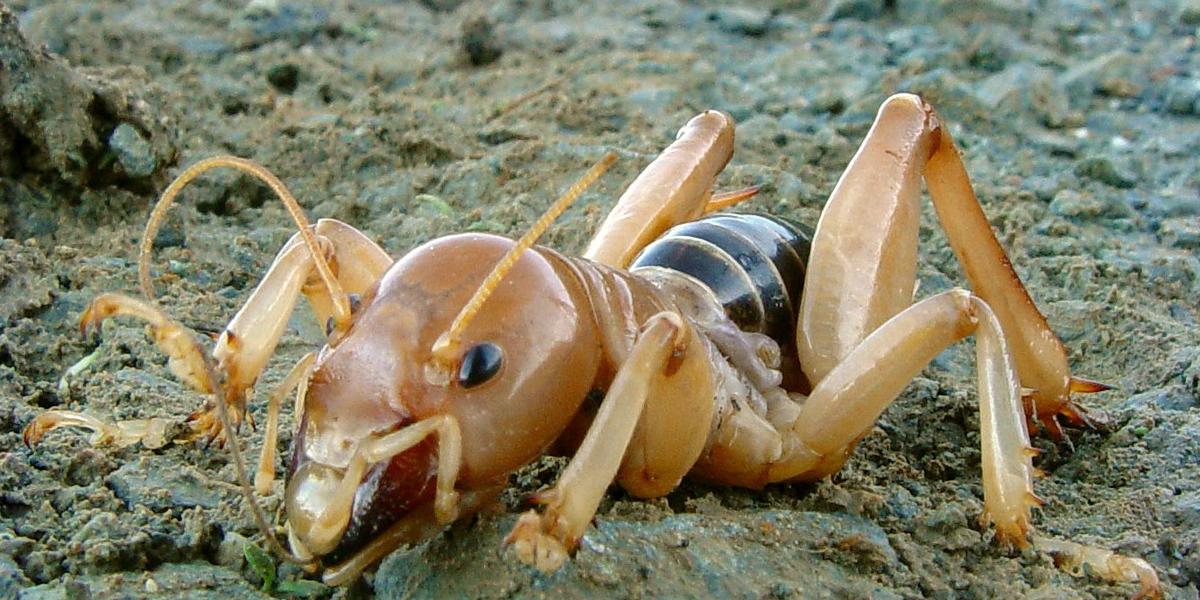 Jerusalem cricket (Stenopelmatus fuscus)
When we asked our panel of naturalists to help assemble this loathsome list, many of them immediately named this grotesque insect. First of all, they are not “true” crickets—nor are they native to Jerusalem (they are indigenous to the western U.S.). They do, however, possess weirdly human-like heads—giving them another skin-crawling common moniker: the “children of the earth.” And, to top it off, they emit a terrible smell and pack a painful bite! 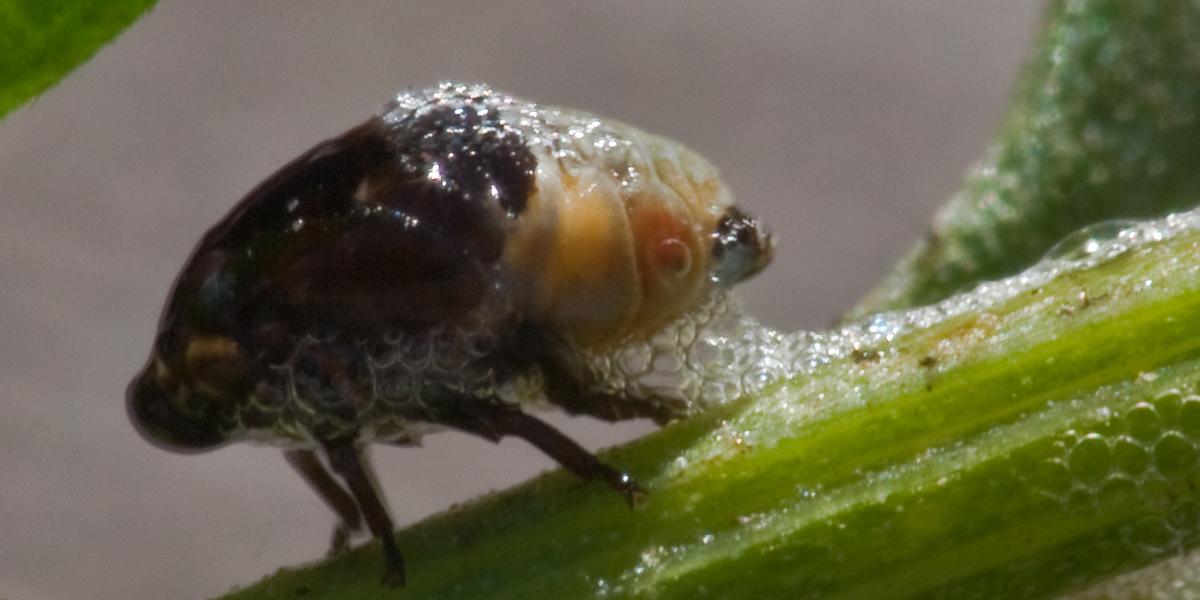 Spittlebug (Philaenus spumarius, among others)
Found across the U.S., spittlebugs are rather inconspicuous as adults—a “garden-variety” insect, if you will. But the immature spittlebugs (the nymphs) surround themselves with a mass of frothy plant sap excreted from their anus. Insulated from heat and cold and hidden from predators, these “mummies” eschew linen bandages for a substance that looks deliciously like spit. 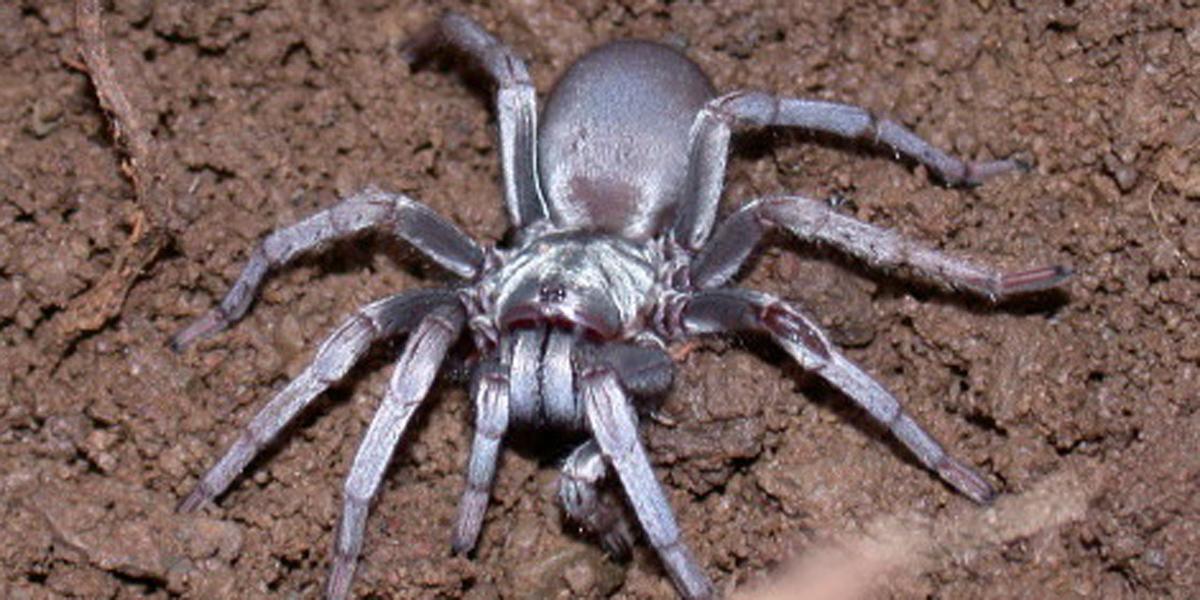 Female Calisoga spider Marshal Hedin/Wikimedia Commons
Calisoga spider (Calisoga longitarsus)
Slightly smaller than a tarantula, this big spider is commonly found across California and ranges in color from brown to an eerie silver-gray. When threatened, it will rear up as a warning before sinking its fangs into the interloper (fortunately this spider is not poisonous). The only other consolation to arachnophobes is that these nocturnal creatures rarely emerge from their burrows. 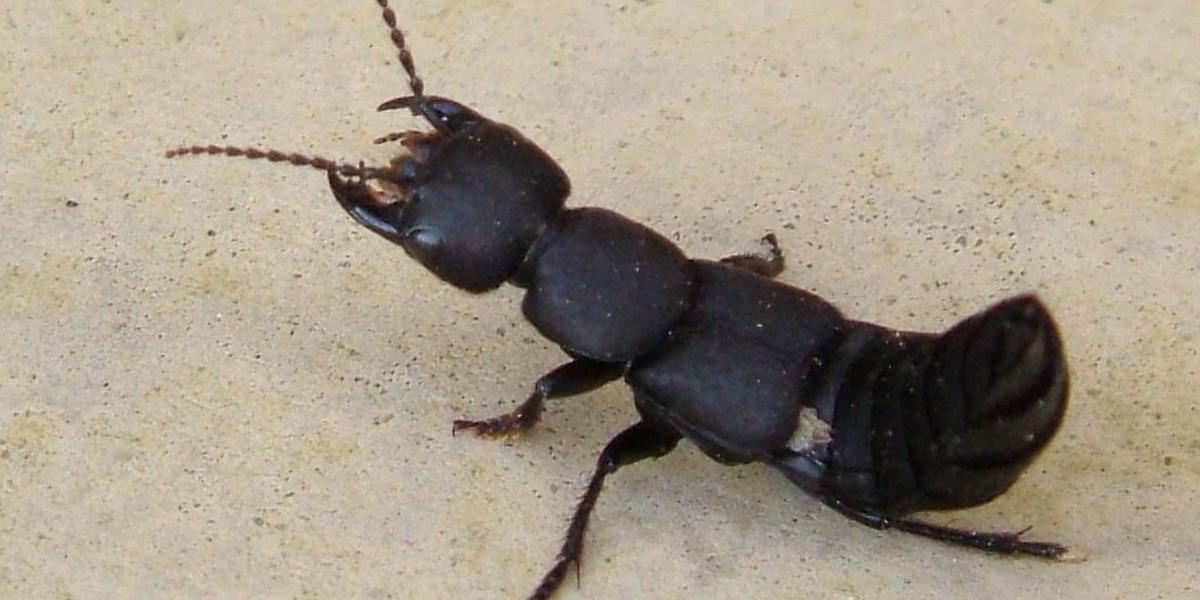 Devil’s coach horse beetle (Ocypus olens)
This large European beetle has been introduced in the Americas. Hunting at night, this insect feasts on worms, woodlice, and carrion. When threatened, it raises its abdomen in a distinctive and menacing posture—not unlike a scorpion (though the beetle does not sting). Its diabolical look, enhanced by its nasty pincer-like jaws, has caused humans to associate this insect with the Devil since the Middle Ages. 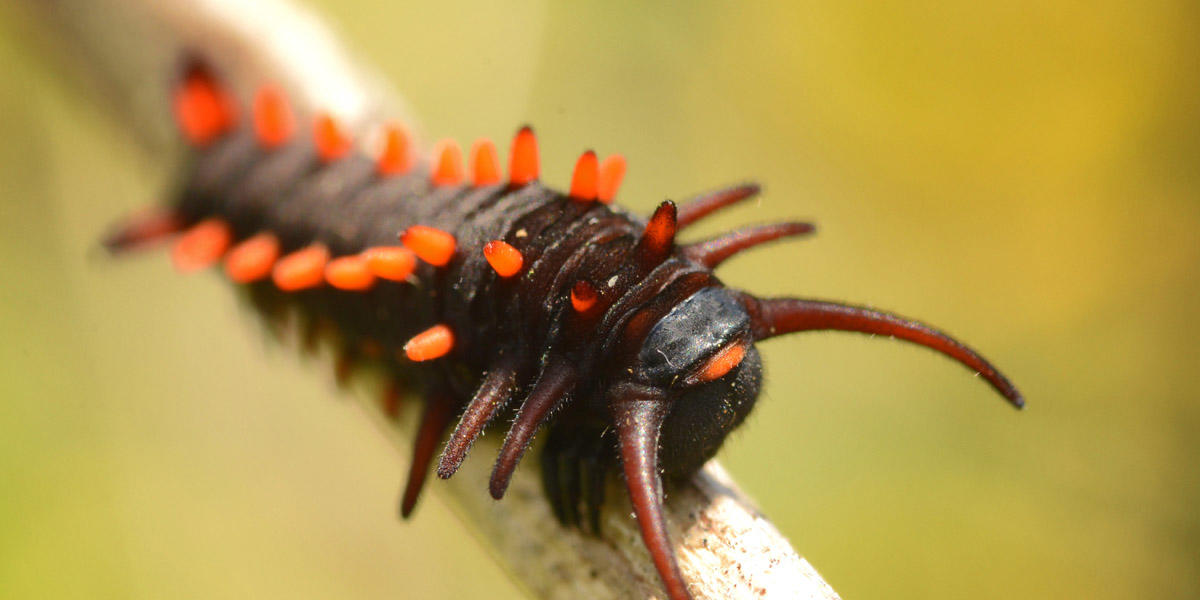 Pipevine swallowtail butterfly (Battus philenor)
Besides having an awesome Latin name, this butterfly is a beaut. Its wings display a lovely pattern of iridescent blues and complementary orange spots. In its larval phase, though, the pipevine swallowtail looks like a creature from the fiery pools of Hades. Or, at least, a caterpillar version of the Star Wars Sith Lord Darth Maul (Darth Crawl?). Because it feeds on toxin-laden pipevine plants (Aristolochia), it’s also poisonous. 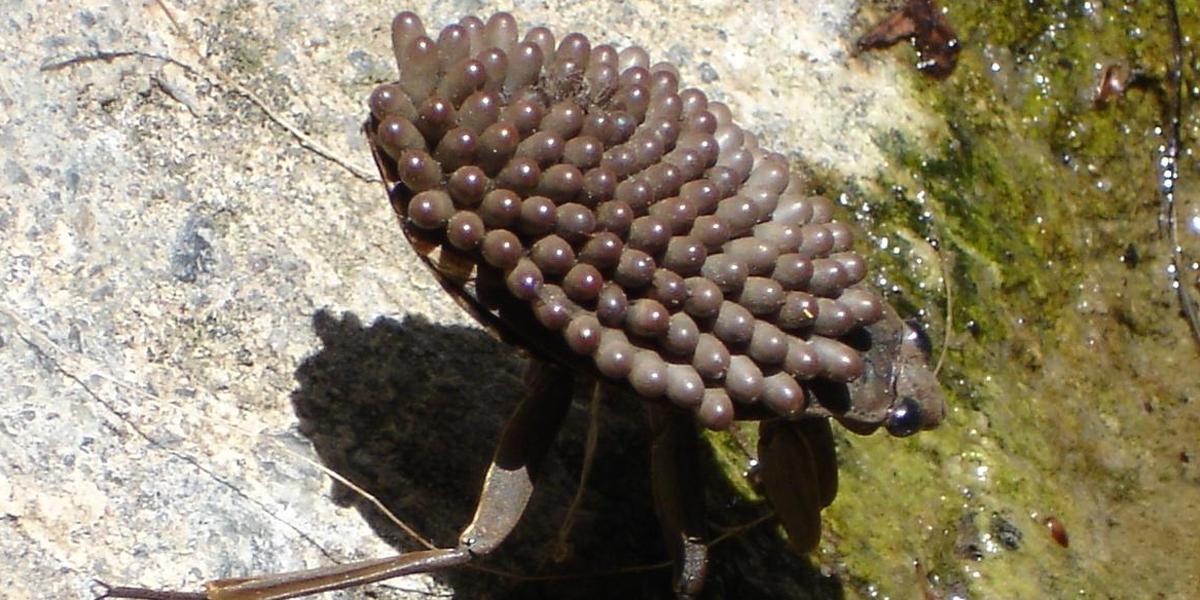 Toe biter (Abedus indentatus)
These big aquatic bugs lurk in freshwater streams and ponds. Lying in wait along the bottom, they pounce on insects, tadpoles, and small fish—injecting digestive saliva before sucking up the liquefied prey. Fortunately, their bite—considered to be one of the most painful in the insect world—does not come laden with poison or require medical alarm. In spring, male toe biters tote masses of eggs on their backs—further accenting their bizarre appearance.
Photo: Male toe-biter carrying eggs on its back (noisecollusion/Wikimedia Commons) 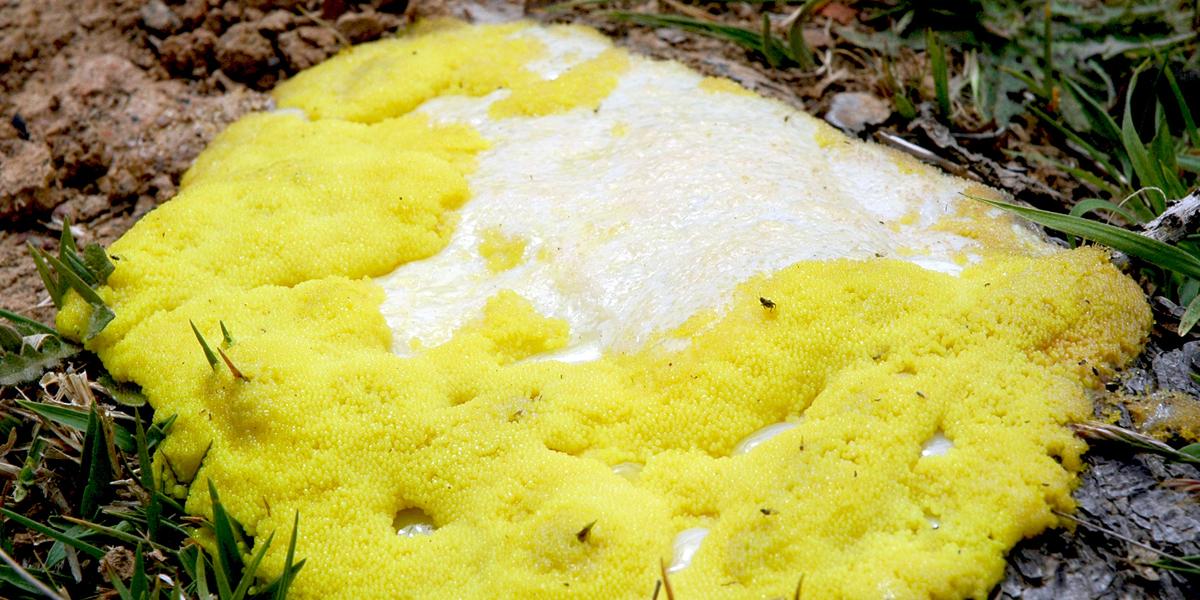 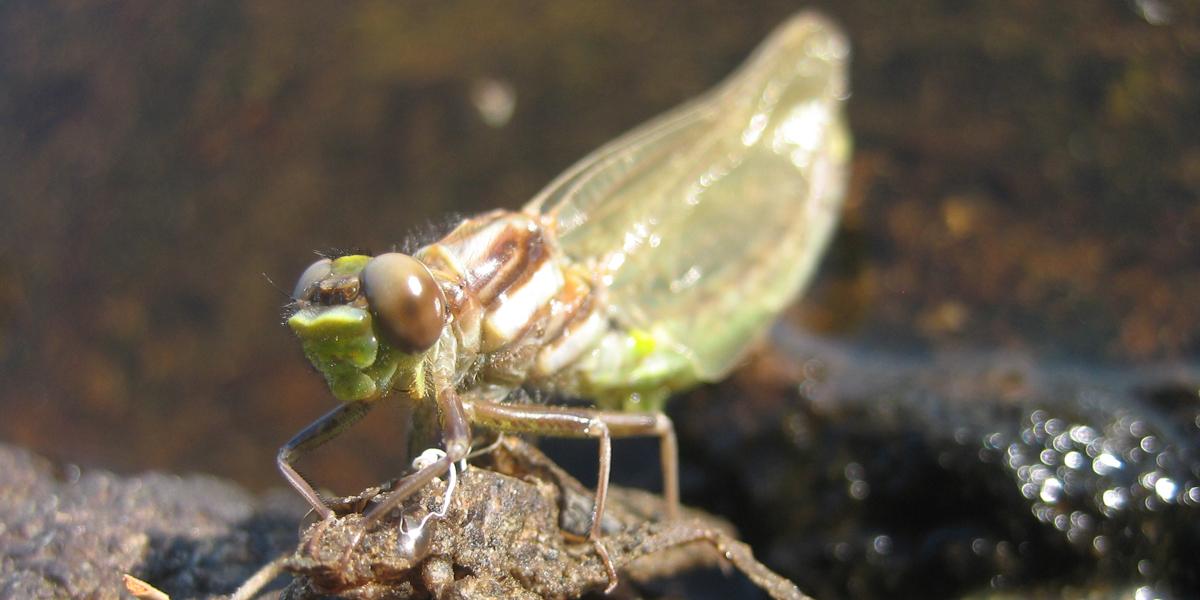 Darner emerging from its nymph self Susie Bennett

Dragonfly nymph
For most of its life, the dragonfly is in nymph form. Lying in wait under the water, the nymph hunts small insects and fish by unhinging its jaw and snapping up its prey. Yes, it unhinges its jaw—a jaw that is half as long as the bug’s entire body! But there’s more. Instead of building a cocoon like a butterfly does, the emerging dragonfly finds a weak spot in its skin, splits it open, and crawls out of its former larval self (pod-people style?). 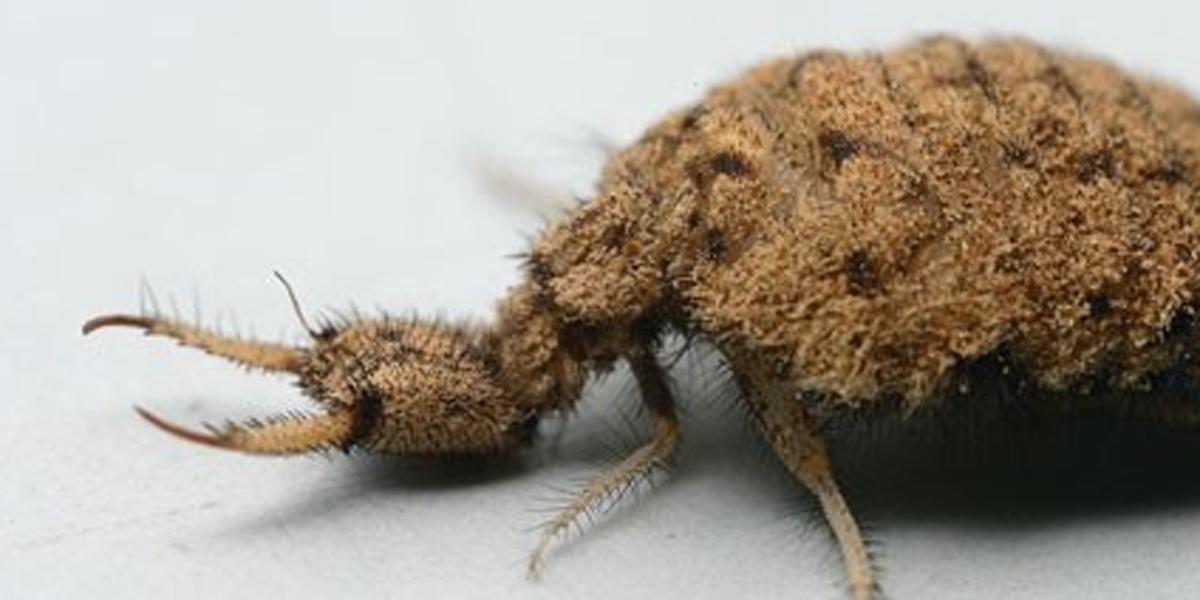 Antlion Jonathan Number/Wikimedia Commons
Antlion larva (Myrmeleon sp.)
Strictly speaking, only the larvae should be termed “antlions”—a name befitting their ferocious appearance. These vicious predators set “traps” for hapless ants and other small insects, which are dispatched by the antlion’s out-sized jaws (the nightmarish mandibles are hollow, serving to suck the fluids out of the prey). Antlions also go by the more cherubic common name “doodlebug”—for the doodle-like winding trails left in the sand as they search for a hunting spot. Awwww! 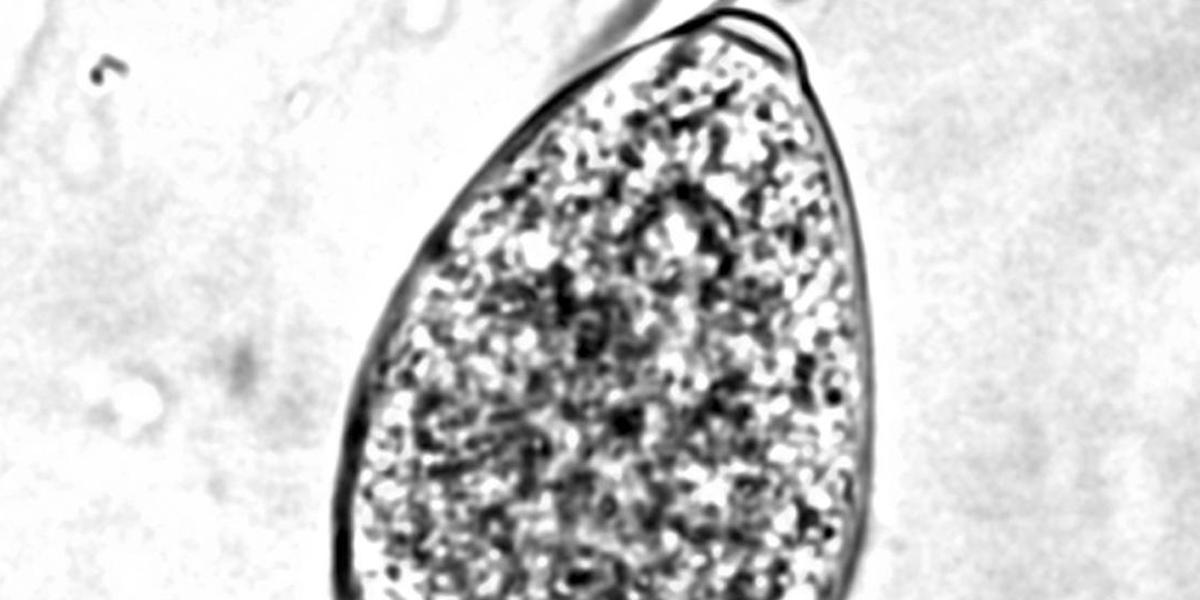 Phytophthora ramorum
What’s a microbe doing on this list? Because it’s responsible for the insidious disease Sudden Oak Death. First discovered in 1995, this plant pathogen has devastated stands of oaks and tanoaks across California and Oregon (read about its explosive spread in this sfgate.com article). It is so aggressive that a few researchers have suggested this pathogen could decimate the state’s oaks. Some trees exhibit a particularly chilling symptom, like something out of a Gothic horror story: blackish-red, tarry sap, bleeding through the bark.