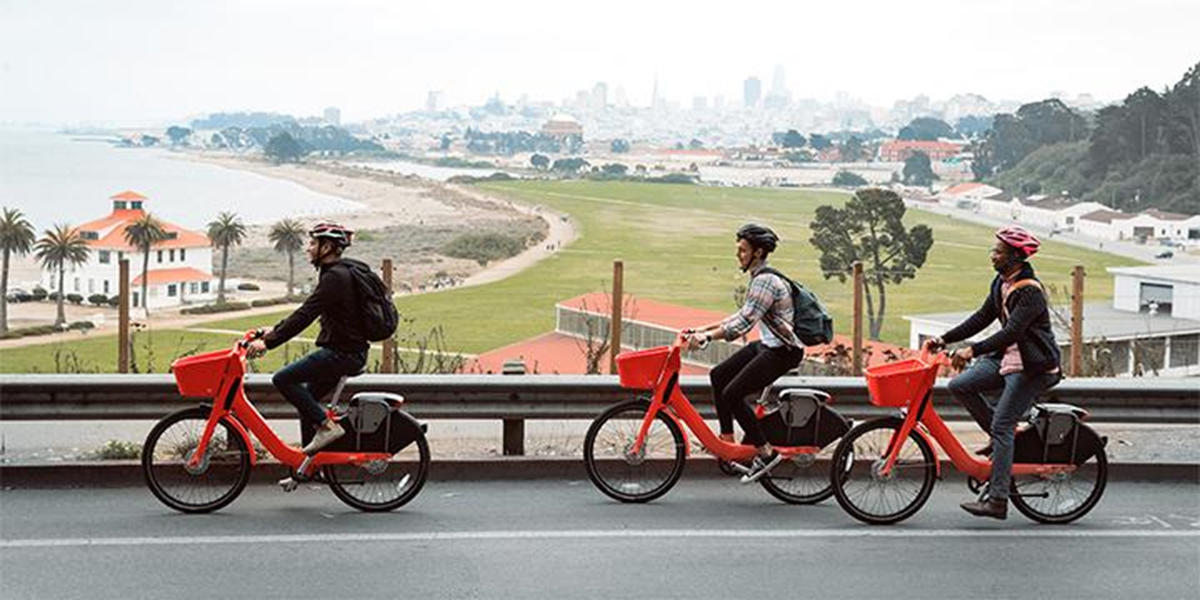 We asked a panel of bike experts for their favorite rides in the Golden Gate National Parks. Read on for the full prescription from these cycle-ologists: directions, descriptions, tips, and more. Then put your mettle to the pedal and get out there!

Pacifica resident Jim Sullivan describes himself as a “local bicycle honcho.” He leads regular rides from Pacifica to Rancho Corral de Tierra in our Golden Gate National Parks (look for upcoming rides in the latest issue of Park Adventures).

“This ride is a fave for me when I have out-of-town guests who want to escape to some of the best scenic places that are nearby.”

When it intersects with the main trail to Mori Ridge, turn left and begin your climb to the ridge on top of Mori Point. Once you summit, head west once again, and take in the grandeur of the Pacific Ocean as it pummels the coastline far below.

Now heading east, you will see the Mori Ridge Trail—take this trail all the way to Rockaway Beach. Take the Coastal Trail all the way back to the start on Bradford Way when day is done.

You can extend the ride by heading north along the levee above Sharp Park Golf Course to Pacifica’s historic pier. The many shops along Palmetto Avenue offer great lunch or dinner options before heading back.

“Some of the great things about this ride are that there are plenty of turnaround points, and the views of Devil’s Slide are terrific.”

Pack plenty of snacks and liquids, and begin at Linda Mar School (Rosita and Peralta, in Pacifica). Head south on Peralta and ride by the Shamrock Ranch. Once past the ranch, proceed through a white gated chicane, which only allows walkers and pedalers through.

You are now on Higgins Way; follow it until it ends by another gate. Walk your bike around this gate, and begin the ascent of the Old San Pedro Road. Once the main highway between Montara and Pacifica, this semi-paved, abandoned roadway is the gateway to Rancho Corral de Tierra from Pacifica.

Three miles in, you reach the saddle. Then you begin the descent into McNee Ranch State Park. Take it easy here—the old roadbed is severely eroded in places, so be careful!

At the bottom of the Old San Pedro Road, you will pass the ranger’s house. Keep going past the house and cross the bridge over Martini Creek. Once across the bridge, you’re in Rancho Corral de Tierra!

See if you can find the abandoned daffodil farm that still blooms magnificently when in season. There are ample trails to explore once within Rancho; many locals frequent these trails, so don’t be afraid to ask directions. 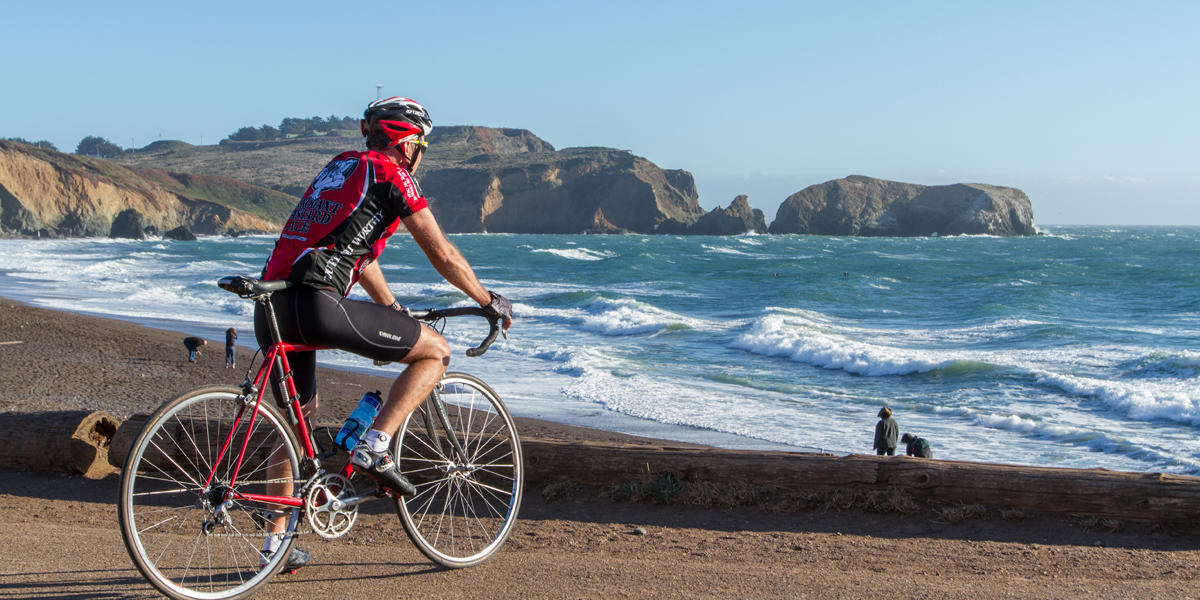 Maureen Gaffney serves on the Board of Directors of the Marin County Bike Coalition.

“I consider myself extremely fortunate. My favorite road ride in the Golden Gate National Recreation Area happens to also be my commute route to work.”

Though I don't ride to work as often as I'd like due to multiple confounding bridge limitations (I live in Larkspur and work in Oakland—no bikes on the Richmond-San Rafael bridge, no bikes on the Bay Bridge), when I do ride, my route takes me through the Golden Gate National Recreation Area.

From Larkspur, I head over Camino Alto (through the Alto Tunnel—someday!), then pick up the Bay Trail on the Mill Valley-Sausalito path and breeze by a bevy of birds in Bothin Marsh. Once on the Sausalito waterfront—blissfully quiet at an early hour—I slow to take in the trillion-dollar views of the City skyline, Angel Island, and the early-morning kayaker slicing through the glassy water.

While the most direct route to the Golden Gate Bridge is on Alexander, winding down into Fort Baker on the newly re-paved and improved East Road is well worth the few extra minutes in my commute. The historic houses, the former military buildings, and the City and Bay views serve as a dramatic backdrop to the orange-clad star of the show—the Golden Gate Bridge.

Once on the San Francisco side, recently minted improvements in the Presidio and the Bridge Plaza area are delightful and most welcome. Crissy Field is ever-inspiring with its combination of bird-, dog-, landscape- and people-watching opportunities, and the sight of swimmers at Aquatic Park always make me shiver.

My ride along the Embarcadero is the most hectic part of my journey, but is usually accompanied by several other comrades on wheel. I end this trip at the Embarcadero BART station for a short jaunt to Lake Merritt in Oakland.  If I’m feeling lazy, my return trip can include a stunning ferry ride across the Bay from San Francisco to Larkspur. 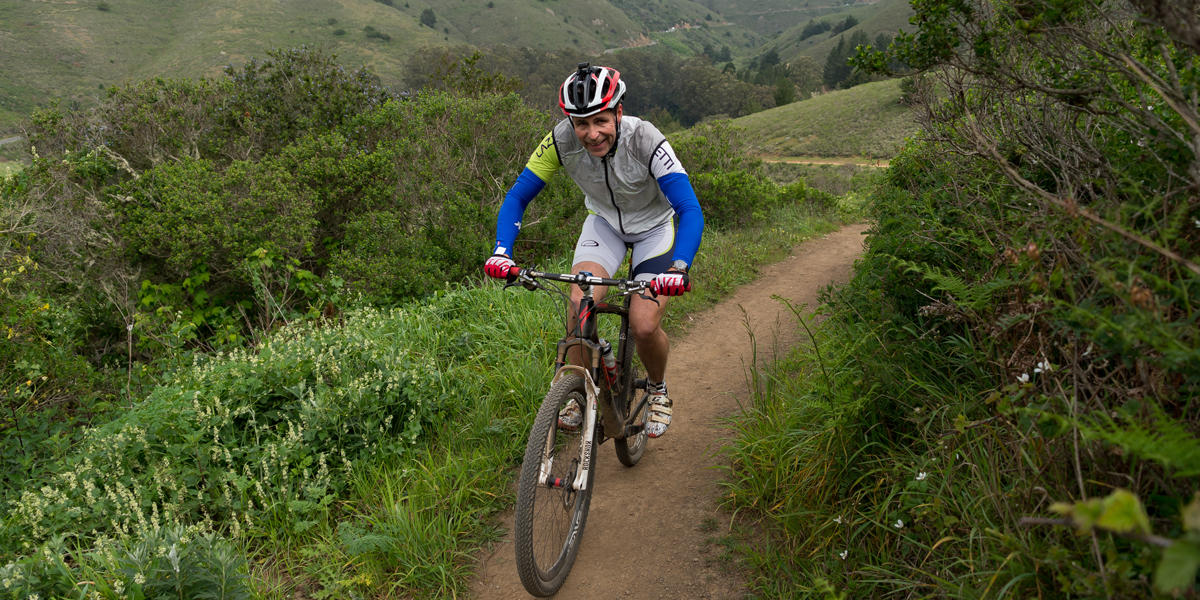 Kristin Smith is the communications director at the San Francisco Bicycle Coalition. In addition to her work advocating for more and better bike lanes in San Francisco, Kristin has also worked as a bicycle tour guide. With great new bike lanes in the city and gorgeous open spaces for road and mountain biking, Kristin is happy to call San Francisco home.

“San Francisco has some gorgeous open spaces to see by bike. One of my favorite rides is along the waterfront in the Marina. On a short 1-hour trek, you can take in some beautiful sights and some hidden secret spots.”

Start at the Maritime Museum (Beach at Polk), and then ride west (toward the Golden Gate Bridge), along the water’s edge, up and over Fort Mason bluff.
Stay on the multi-use path beside Marina Boulevard, along Marina Green, and past the Marina slips. At the end of the Marina harbor, turn right toward the Bay and left onto the Promenade, and follow the water’s edge to the Warming Hut near the foot of the Golden Gate Bridge. It’s a multi-use path the whole way!
Be sure to stop and check out the “world’s smallest lighthouse,” halfway out the Marina breakwater, and also the Wave Organ at the very end of the breakwater.

Elyse Wood, the communications and administrative coordinator at Crissy Field Center, regularly embarks on 60-mile rides on the weekend.

“Besides being a rite of passage of sorts for Bay Area cyclists, this ride boasts a spectacular view of the Bay. On the backside of Conzelman, it isn’t uncommon to see deer grazing near the side of the road—something you might not notice in a car. You’ll get beautiful scenery, a great workout, and bragging rights!”

You’ve probably driven up Hawk Hill, but it’s also a great bike ride—great enough to even do it twice.

Coming from San Francisco on the west sidewalk of the Golden Gate Bridge, make a left at the top of the hill. Keep climbing up, past the roundabout to the very top.

Once there, take a rest, maybe stretch, and then prepare for the winding, fast, but incredibly fun descent down the one-way Conzelman Road. You’ll follow Conzelman to the right (which turns into Bunker Road) past the Marin Headlands Visitor Center.

You’ll take that road until you reach McCullough Road; turn right and begin your second ascent up to Hawk Hill. At the roundabout you’ll once again continue the climb upwards.

Once you reach the top, take a breath, take in the scenery one last time, and go down the way you just came up and back over the Golden Gate Bridge. Starting from the Bridge, the ride should take about 1.5–2 hours roundtrip. 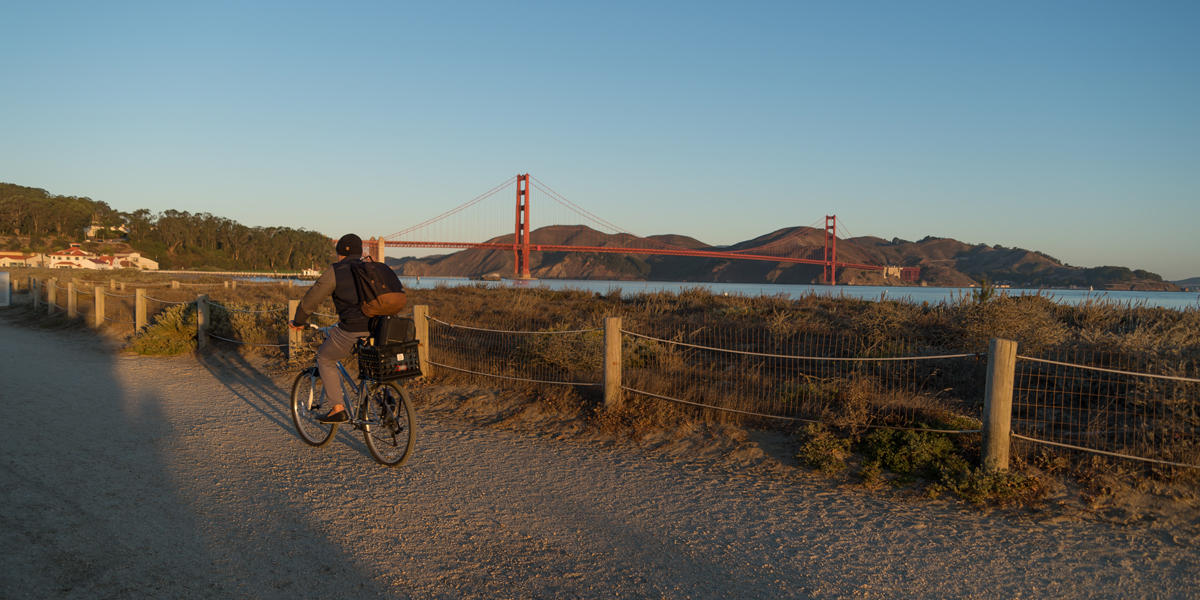 “I love this ride because after 25 years of living in San Francisco I still have not gotten over the fact that I can ride to the Pacific Ocean in five minutes from my house.”

Easily my favorite ride in the parks, and the one I take most often, is the path along the Great Highway along Ocean Beach; I enter on Lincoln and ride down to the Zoo. On this ride, you can enjoy stunning, uncluttered Pacific views, ocean air, and minimal traffic and commerce along a 4.5 mile (one way) strip of paved path along the dunes.

I grew up in the Northeast, where nearly every mile of coastline seemed to be privately owned. What we have here is dizzying to me. Cool stuff includes the Pacific Ocean; snowy plover (if you stop to walk on the beach); lots of people enjoying the scene on bike, foot, or stroller; surfers and big kites; the "sleeping lady" profile of Mount Tam to the north; and views out to as far as Drakes Point in Point Reyes on a clear day.

Plus, the ride is embarrassingly easy—all flat. Even if the winds are coming in from the northwest, it’s comfortable. After particularly windy days, the west-side south-bound lane of the Great Highway is closed due to drifted sand, and you can ride on that instead.

Howard Levitt, director of communications and partnerships of Golden Gate National Recreation Area, changes from his ranger uniform to his cycling shirt—and back again—with the speed of Superman.

“This is my go-to ride for a weekend when I don’t want to leave the city. It takes me to some of the most spectacular and interesting parts of this incomparable city, including a number of destinations in our national park (60% of the ride is in, or adjacent to, the Golden Gate National Parks).”

I start at home in Noe Valley, then ride southwest over the flanks of Mount Davidson to Lake Merced. At Lake Merced, I’m riding past the north end of Fort Funston, with its trails, dunes, and views. From Lake Merced, I ride along the Great Highway past Ocean Beach—another park destination—all the way to the Cliff House and Lands End.

The climb from Ocean Beach up to the new Lands End Lookout is a bit steep and scary (due to traffic), so I sometimes cut inland at Fulton and work my way back to Point Lobos Avenue and 48th Avenue, where I again enter the park. I usually stop to take in the views from the USS San Francisco Memorial and the new Lands End Promenade.

Then I continue down Clement Street, zig-zag through the Sea Cliff neighborhood, and enter the Presidio at 25th and Lincoln. The Presidio is a cyclist’s paradise, so I ride where my spirit takes me toward Long Avenue, where I drop down to the Bay just east of Fort Point. From there, the wind is at my back as I cruise down Crissy Field, then along the Marina Green to Fort Mason.

From there, I stay on the trail down to the historic ships at Hyde Street Pier and Aquatic Park in San Francisco Maritime National Historic Park. By now, with miles of park riding under my wheels, I'm ready to take on the Embarcadero, AT&T Park, China Basin, and then back home though the colorful Mission District.

I never miss a stop at one of the taco trucks on Harrison Street to fuel me back home.