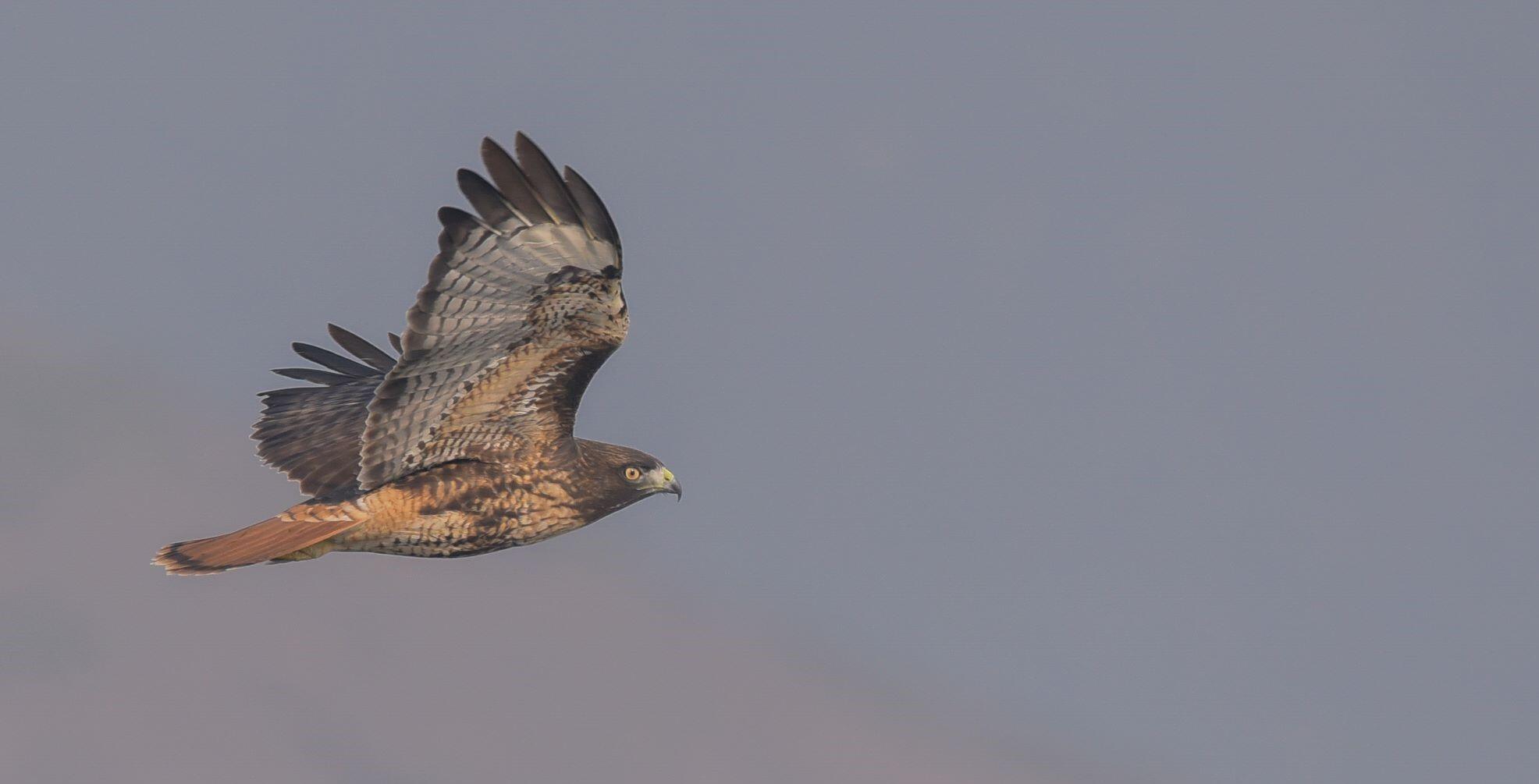 November 2018 was a month punctuated by smoke in the San Francisco Bay Area. Eastern winds, locally called the Diablos, sent smoke from the Camp Fire (near Paradise, Calif.) first coastward toward Bodega Bay, and then southerly to fill the San Francisco Bay basin. By its first night, Nov. 8, the Camp Fire had grown to 20,000 acres, and at sunset, the western sky blushed orange-red.

For most of 12 days, the Bay Area skies remained brown-orange and we cancelled GGRO field research knowing that volunteer and staff safety was our highest priority. Daily AQI floated in the 100-200 zone, occasionally jumping over 200. Even inside the GGRO office next to Rodeo Beach, my eyes and sinuses were hot and dry. Schools closed on the worst days. Many Californians put on face masks just to get outside, this inconvenience just a tiny reminder of the lives and homes lost in Butte County.

As we are an organization devoted to raptor migration monitoring, one big question circled us throughout these hazy weeks: How do raptors respond to fire smoke? Do migrants change routes? Do hawks in the fire zone escape the smoke plume? Are hawks more sensitive to corruptions of the air than we are? All great questions, and worthy of research. After doing a little digging online, I had a much better framework for thinking about the impact of smoke on raptors.

The first thing to think about is bird breath—avian lungs are fundamentally different from our own. Bird breathing creates air flow in one direction. It's a four-step process that first moves inhaled air from the mouth to abdominal air sacs. The second step moves oxygenated air across very fine air capillaries inside the lungs, where a highly efficient counter-current system exchanges O2 for CO2. Third, the CO2 from the lungs is pulled forward to anterior air sacs, and fourth, these air sacs press the CO2 out through the nostrils.

What is the upshot of this dramatically different respiratory structure? Biologists conclude that birds have a more effective breathing system. A few of the details that support this: (1) birds have longer (2-10x) and wider (1.3x) trachea than comparably-sized mammals; (2) bird gas exchange takes place in hundreds to a few thousand (depending on species) parabronchi, whereas mammalian gas exchange takes place in millions of very tiny alveoli. One result of this is that bird lungs have 2x the surface density of gas exchange tissue in contrast to comparable mammals. (3) The tissue thickness of the avian gas exchange barrier is about half of the mammalian lung. As a result, birds can take up to 2x the amount of gas as mammals in one inhalation.

GETTING BACK TO SMOKE

With this new-found knowledge of bird lung efficiency, I started mining the scientific literature for articles relating birds and smoke, and all signs led me to Olivia Sanderfoot, who had just published her master's thesis on exactly that.

As a graduate student at the University of Wisconsin, Madison, Sanderfoot worked with Professor Tracey Holloway to summarize the science on birds and air pollution. Sanderfoot and Holloway (2017) was published as "Air pollution impacts on avian species via inhalation exposure and associated outcomes" in Environmental Research Letters in 2017. Sanderfoot and Holloway produced a broad review, encompassing all of air pollution as opposed to just smoke impacts. They recovered more than 200 papers published since 1950, and they emerged with some important findings.

Most of the published research on birds and air pollution fell into three forms of research: lab studies, natural landscape studies (in situ, meaning in its normal place), or case studies. Sanderfoot and Holloway grouped the pollution impacts on birds into five areas: (I) respiratory distress; (2) detoxification and immune-suppression; (3) behavioral changes; (4) habitat degradation; and (5) impaired reproduction and its population effects.

The wide range of respiratory responses alone encountered by Sanderfoot and Holloway made my head spin and sent me back to the web to read the newest online articles on bird physiology. For example, birds exposed to greater pollutants in urban zones showed: (1) decreased effectiveness of the pulmonary surfactant system, a lipoprotein complex that promotes lung structure and immune response; (2) heightened amounts of adrenomedullin-type proteins that signify high respiratory stress; and (3) greater numbers of macrophages, white blood cells that "eat" alien particles.

Before your eyes glaze over from reading words like adrenomedullin, think about the range of molecular responses in just these three examples, signifying how difficult it might be to demonstrate a simple pollution or smoke impact on birds. (Then go look up adrenomedullin, a mammalian protein related to vasodilation and asthma response, just discovered in 1993.)

Although Sanderfoot and Holloway offer a detailed canvas to help us comprehend the range of impacts of smoke on birds, they acknowledge the complexities that must be considered. Among them, the range of types of chemical compounds or particulate matters; fire smoke, especially urban fire smoke, is a cocktail of chemicals. Other confounding aspects: the size and proximity of the pollution point source; the gradient of the pollution; wind dynamics; inversion layers; even the timing in the bird's annual cycle.

Sanderfoot and Holloway also remind us that not only is it difficult-maybe impossible-to assess ambient concentrations of specific chemicals in the real world, but there is also a likelihood of impacts from habitat degradation, or from changes in bird diet and behavior, that would accompany an exposure event. How can we possibly tease these factors apart?

NO SUMMING UP YET

The smoky November of 2018 left all of us with much new food for thought, especially given the ancient history of fire events in California summers and autumns. How do raptors-local or migrating-respond to massive amounts of smoke? How do we measure this response unless we are out in the event, ourselves exposed to dangerous smoke? Could there be an easy examination, or a sampling of a hawk in hand (blood, feather, mucous) that might give evidence of its smoke exposure? Smoke antibodies? None of this has been worked out yet, but these will clearly be questions for the GGRO future in this climate-changing California.