Thousands of miles through the parks with YiOu Wang

Each morning, with a stroopwafel in hand and the scent of freshly brewed coffee hanging in the air, YiOu Wang’s mind travels over the miles of trail she’ll be covering that day. On a weekend it might be 20 miles of loops throughout the Marin Headlands. On a weekday, 10 miles past Phoenix Lake, then up and around Mount Tamalpais. Lacing up her shoes and stepping out into the soft light of dawn, YiOu calls her morning run in the parks the best part of her day.

As a professional trail and ultrarunner based in Marin County, YiOu has worn her own path of grit and grace through Mt. Tam, the Headlands, and many other park sites. Having traveled the world for the sport’s most competitive races in breathtaking locations, YiOu’s home trails are still her favorite place to train.

“Having access to such a variety of beautiful trails is definitely a huge boost to training,” YiOu said. “I think they are just so inspiring that they help get me out the door if I’m feeling tired or even if it’s pouring rain and the weather’s not great, I’m still motivated to go and run around on the trails because it’s so fun and beautiful to be outside and to be in nature. I also think that the ease of access we have in the Bay Area is incredible.”

Finding so much of her own fulfillment in the parklands, YiOu is passionate about increasing accessibility for others. When she isn’t taking on repeats up Slacker Hill, YiOu is working with students as a high school science and math teacher, leading hikes and field trips in the parks.

“I absolutely want more people in our public lands and using our public lands for recreation or teaching opportunities,” YiOu said. “What’s really inspiring to me is to work with young people of all backgrounds on exploring what it is they have in their backyard, learning more about it, and then being an active part of studying it or even getting involved in native habitat restoration, or counting birds or something simple like that.”

Over the last year, YiOu has joined the many community members who have turned to the parks for resilience and healing.

"Our parks have been and continue to be crucial during the pandemic,” she said. “It's become even more of a vital resource for people to exercise and get fresh air. Many new users are also visiting the parks.”

As someone who has spent countless hours in the parks and with youth, YiOu often reflects on what future climate resilience might look like. Fire, drought and sea level rise are a few of the effects of climate change that she has witnessed firsthand, that have fueled her activism and calls for collective action.

“We in the Bay Area are not going to be immune to the effects of climate change,” YiOu said. “I run a lot on the Mill Valley bike path and these days I have to keep track of when the king tides are coming in because they are so high that they flood the bike path. I run a lot in the watersheds, and in the early summer you’ll see the level of each reservoir and then towards the end, by October or November, you really see how low the lake levels are and you kind of realize, there’s not much of a buffer. This will get worse unless we fight for climate action.”

Several of YiOu’s fondest memories have taken place in the parks. Her wedding ceremony was held on Bon Tempe Lake—in true trail running fashion, the whole wedding party ran a lap around the lake and she and her partner, Sean, ran over Mt. Tam to get to their reception.

Another top running memory for YiOu was the 2019 North Face Endurance Challenge in the Marin Headlands, where she placed first in the 50-mile race. Known for its steep climbs and panoramic coastal views, this race is one of the most celebrated and competitive ultra trail runs in the world. When the starting signal sounded, she took off with a headlamp into the fog to race along the familiar trails that she had trained on so many times before—Rodeo Valley, Dipsea, Bobcat, and Coastal to name a few. Spectators cheered as YiOu powered along the Golden Gate Bridge to the finish line at Crissy Field.

As YiOu passes back through her front door and unlaces her shoes, memories from the parks run through her mind: views of the Pacific, the melody of chirping birds, and the woody fragrance of towering redwoods.

“I get so inspired and derive so much energy from running in the parklands,” she said. “I think it allows me to run farther than I can ever imagine. Having this access to open space satisfies this fundamental human need to be close to nature and to be inspired by nature and to really feel how the forest wakes up or how the animals wake up and it’s just really the best time of my day.” 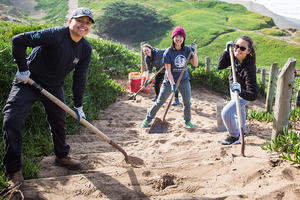 Giving Back to the Trails at Golden Gate 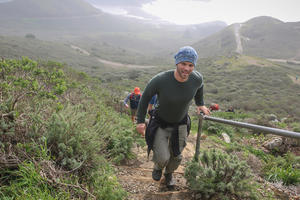 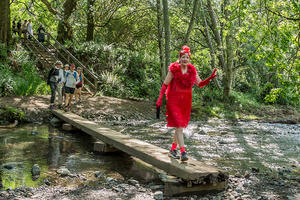