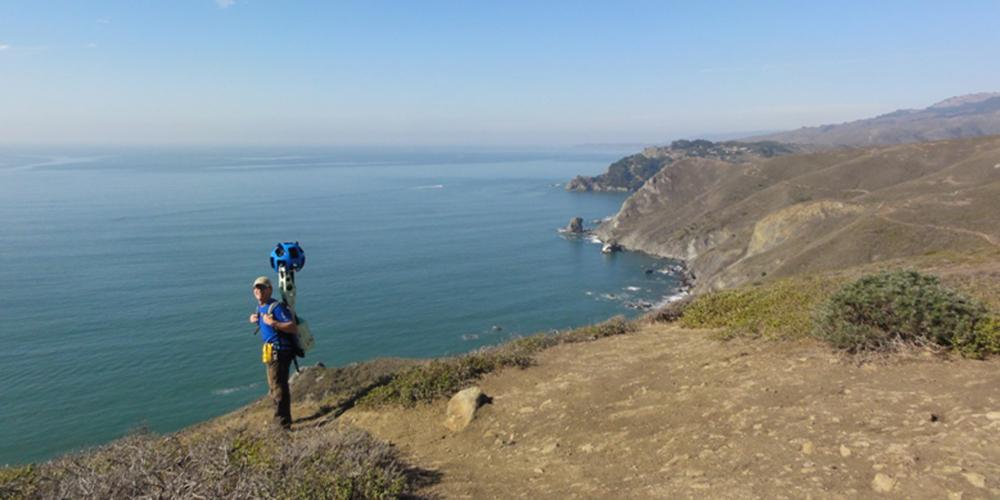 Google developed the Trekker apparatus to take photos in places inaccessible to its vehicles—but accessible to hardy surveyors on a boat, snowmobile, or their own two feet.

“You do know the pack weighs 40 pounds, right?” my manager asked, when I told him I wanted to spend a work day hiking around the Golden Gate National Parks with a Google Trekker on my back.

I said that I did know. Forty pounds should be no sweat for an experienced backpacker, so I felt that I was up for the physical challenge/ordeal of schlepping a somewhat clunky backpack mounted with 15 cameras that capture, every few seconds, panoramic images of the surroundings.

Google, famous for its Street View cars that photograph city roads, developed the Trekker apparatus to take photos in places inaccessible to its vehicles—but accessible to hardy surveyors on a boat, snowmobile, or their own two feet.

After a successful test-hike through the Grand Canyon, Google launched a program this year for nonprofits, governmental agencies, research groups, and tourism boards to borrow the Trekker. The National Park Service and Parks Conservancy jumped at the chance to have the trails of Golden Gate documented in this manner. The Conservancy would be the first national-park “friends organization” to borrow the Trekker and engage the community in the effort.

And I jumped at the chance to participate—thinking that I knew what I was getting into. During our training session, all of us—Conservancy staff and interns, longtime volunteers, park-partner representatives—were briefed on the program, the technical aspects of the apparatus, and safety do's and don'ts. And then we each tried hefting the Trekker.

Wanting to prove my backpacking bona fides, I walked around the room, bopping up and down a bit, even threw in a little mambo action. No big deal! Lost sensation in merely one arm, due to the straps cutting off some non-essential blood circulation.

On the day of my hiking shift, I met up with my teammates—Jereme Monteau, a co-founder and developer of Transit & Trails for the Bay Area Open Space Council; and Anna Fryjoff-Hung, a park volunteer. The Conservancy’s GIS guru, Michael Norelli, briefed us on our manifest for the day: two hikes in the Muir Beach area—a Coastal Trail loop around Pirates Cove, and an out-and-back up Dias Ridge. “Beautiful area,” Jereme said, enthusiastically pointing to some scenic spots on the topo map. Beautiful—and steep.

We loaded the Trekker into the backseat of my car slowly, carefully, gingerly, as if it were a frail old man. The Trekker is an amalgamation of high- and low-tech; its 15 camera lenses (protected only by a thin metal cage) are mounted on a neck attached to a watertight central processing unit above a couple of chunky batteries locked into their boxy compartment with hinges that one might see on Grandpa’s box of fishing tackle.

The power switch is a curiously retro knob, and the two blinking green indicator lights look like they were stripped from the set of a ‘50s sci-fi flick. In terms of the sophistication of its design, the Trekker lands somewhere between Calvin’s Transmogrifier and a Ghostbuster proton pack.

Propped up on the floor, leaned against the seat, and strapped in with the seat belt, the Trekker was clearly visible in my rearview mirror as I started up my Corolla. The “Eye of Sauron”—as we dubbed it—was on me the whole way up to Muir Beach.

During the ride I found out that Jereme ran the North Face Endurance Challenge 50K last year and regularly competes in The Great Ski Race in Tahoe. And Anna has led Outward Bound backpacking trips across the Sierras and Cascades and currently teaches basic rock-climbing classes and technique clinics at a climbing gym in the Mission. As for this guy, whose personal-best longest run is 25.2 miles short of a marathon, I was happy to let the athletes take the lead when we arrived at the trailhead.

Anna took the first shift. Jereme held up the Trekker as she wiggled her arms through the arm straps and buckled in. She pulled out the on-board Android phone that functions as the control panel and explained to me the basic features. Unlock. Play. Pause. Lock. Tap here to check the automatically generated QC (Quality Control) photos. Make sure the number in the upper-right corner is increasing—indicating that the Trekker is accumulating images. And that was it.

To make sure her companions weren’t constantly in every Trekker image, Jereme hiked ahead of Anna—out of the camera’s omnidirectional lines of sight—and I did the same, bringing up the rear. With each of us equipped with a walkie-talkie, we began our hike up the ridge above Muir Beach.

The people we encountered along the Coastal Trail reacted in exactly the ways that other Trekking volunteers had reported. Most of the park visitors could not resist their curiosity and wanted to know about the project. Some guessed right away that it had something to do with Google Street View. Many asked how heavy the pack was. A couple of them were worried about privacy; one gentleman, cruising by on his mountain bike, slowed down to ask, “You won’t be able to see my face, right?” I assured him that, in processing the images, faces are automatically blurred out.

And then there was the fellow who simply shook his head with a “golly gee” expression on his face, muttered under his breath “Amazing,” and went on his way down the hill.

Meanwhile, the topo map wasn’t lying: the elevation gain was dramatic (for the Marin coast). I found myself huffing and puffing while, far ahead, Anna continued her steady and inexorable climb. After a static crackle, Jereme’s voice came over the walkie-talkie: “I’m at the top of this next rise; I’m going to wait here for you guys. Anna, you doing alright?”

In the distance, Anna went trooping on, apparently unfazed by the reality that we had saddled her with the most difficult climb of our mission. I could see the Trekker on her back go on bobbing and nodding. There was only silence.

“I think she hates our guts,” I joked. Inside, though, I was beginning to get nervous. My legs were already burning from the initial ascent, and I wondered what would happen once I actually had to carry the thing. I took some comfort in the fact that I was on a three-person Trekker crew—and not a two-person shift. One person could carry the Trekker and the other could carry me.

I met the others at the top of the rise, where Anna explained she didn't hate our guts—there was merely a walkie-talkie malfunction. At this point, it appeared the trail was starting to gradually swerve back in the direction we came. And it appeared the trail was going primarily downhill—which I thought would be a boon for me. I volunteered to take the Trekker. “I could go a little farther,” Anna said bravely. “But, since you offered, I’m not going to refuse….”

With the backpack sagged on my shoulders, the others helped me adjust the straps so they wouldn’t impinge on the circulation of oxygenated red blood cells. Jereme set off ahead, and as soon as he was out of sight, I put one foot in front of the other, and began my haul.

Initially, I worried about the quality of the imagery. Looking at my shadow, I noticed that the silhouette of the long neck and bulbous head of the Trekker was bobbling around with every step I took. I didn’t feel like I was flouncing down the trail, but I grew concerned that the wobbling was producing blurry photos. I checked the Android device: the image count continued scrolling up, that was good; and I tapped to see the QC pictures—and they looked OK too.

So my worries turned to my straining muscle fibers. Already tired from the climb during the first part of our hike, I was suddenly introduced to parts of my physiognomy that I barely knew—and they began shouting at me in a way quite unbecoming among strangers. In an attempt to distract myself, I started christening my shrieking new friends: quads, pentas, sextas. Achilles, Hector, Agamemnon. Hammies, whammies, Denny’s Grand Slammies. And so forth.

Other choice words spilled rhythmically from my mouth as I went, one by one, down a set of check steps and felt the shock of each step shoot straight from heel to knee to hip to neck. Gradually, the “Eye of Sauron” began to feel as heavy as Mount Doom.

Wearing the Trekker challenged not only my body but also my sense of balance. It turns out that walking with a fat baby giraffe strapped to one’s back dramatically changes a person’s center of gravity!

This presented few problems on flat ground and slight inclines—but a daunting task when I had to make my way down even a mild slope. Slipping on the skittering dirt and falling on my keester is one thing, but tumbling down a hillside while lashed to a piece of borrowed state-of the-art technology (valued at approximately a kajillion dollars) is another. Faced with a particularly treacherous slope, I shifted sideways, bent my knees, bowed my back, said a prayer to the God of Grippy Boot Tread, and made like a crab on dull ice skates.

But, once back on level ground and in a hiking groove, I took a minute to admire the panorama ahead. The blue of the Pacific before me was the color of calm and ease. To my right and left, rugged cliffs stretched north and south, far into the warm haze that marked the limits of my sight. And, on this day with no strafing winds and only the mildest of breezes, there were no sounds save for the swish of frothy water below and the bark of a sea lion somewhere in the distance.

Then—a sudden burst of static. “You seeing this?” Jereme asked on the walkie-talkie, from his vantage point ahead on the trail. “Not a bad view, right?”

And then I realized the purpose behind our efforts to capture first-person views of these national parks, these beautiful places, these precious patches of land we all share and draw strength from. After we finish our month-long project to Trek all the trails at Golden Gate and Google processes the images and makes them available online (six to eight months from now), those pictures will serve to inspire those who might come out to the parks, and give a taste of the experience to those who cannot.

All will get a sense, right through some smooth cold screen, the healing power of wide open spaces and the limitless horizon. The power of a park visit to ease one’s awkward burden, take a leaden weight off— make a memory of the lightness of this day.