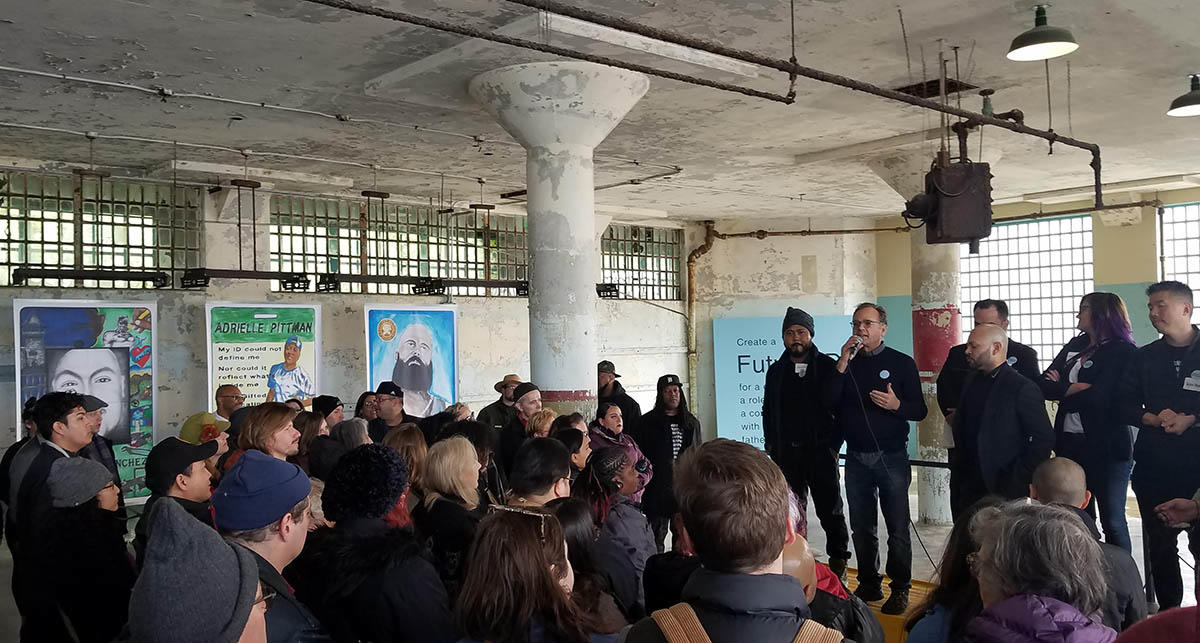 When Jarred Williams was incarcerated he was “a number in a file cabinet,” and nobody from correctional officers to prison staff even knew his name. Jennifer Leahy talked about being controlled by color, from orange jumpsuits to the color of your skin.

Future IDs at Alcatraz, presented in partnership with the Golden Gate National Parks Conservancy and the National Park Service through the Art in the Parks program, shows a more complete picture of people with conviction histories.

Artist Gregory Sale and a team of project collaborators with conviction histories created a simple template to produce hope, with the results on display on Alcatraz Island through October.

The team invites project participants to envision their future self, whether it’s a job or a new role in society. Participants then create artwork that can often resemble an identification card.

Unlike those soulless numbers on prison IDs, Future IDs are rooted in hope and the possibility of transformation. That’s how it is for Bruce Fowler, who’s currently incarcerated in San Quentin State Prison and is up for parole soon. He imagined his Future ID as a boat captain’s license, and said afterwards “I’m now more aware of what I want and can better focus on that goal.” For more of our interview with Fowler, click here.

The large, colorful pieces hanging in the New Industries Building represent diverse interpretations of the Future IDs theme, from a self-portrait made of QR codes to other IDs that say “Rehabilitated” and “Mom too.”

Senghor delivered those words at a Future IDs “Day of Public Programs” welcome event at Alcatraz Island on February 16. Community outreach is a large part of the project. Sale and his team are inviting community groups to the island to co-host artmaking events and monthly public programs throughout the duration of the project.

At the Day of Public Programs, the importance of community was on display. Henry Frank, a Native American of Yurok and Pomo descent who spent time in San Quentin, blessed the event and reminded everybody “this is Ohlone land.” At one session, workshop participants physically erased the term “inmate ID” from a template, had a discussion about the significance of that symbolic gesture, then started to create art on the newly cleared paper.

Throughout the day, people showed their appreciation by snapping or giving “jazz hands,” so as not to disturb the nesting cormorants on the wall outside the New Industries Building.

Alcatraz and its layered history as an International Site of Conscience is a key part of the project, a platform for discussing the issues in play.

Those issues hit home for project collaborators, whether they have conviction histories themselves or represent a network of organizations helping people with re-entry.

One of the collaborators is Sabrina Reid, who spent 25 years in and out of prison and is now working with a variety of key organizations.

Reid mentors young adults with conviction histories and serves on San Francisco District Attorney George Gascón’s Formerly Incarcerated Advisory Board. She took a young man out to Alcatraz the day after he got released from jail, and when he spoke to a table full of people at Future IDs his moving story “impacted the entire place.”

Project collaborator Kirn Kim “loved the idea of being able to redefine my identity. Because my identity for so long has been that of a felon.” 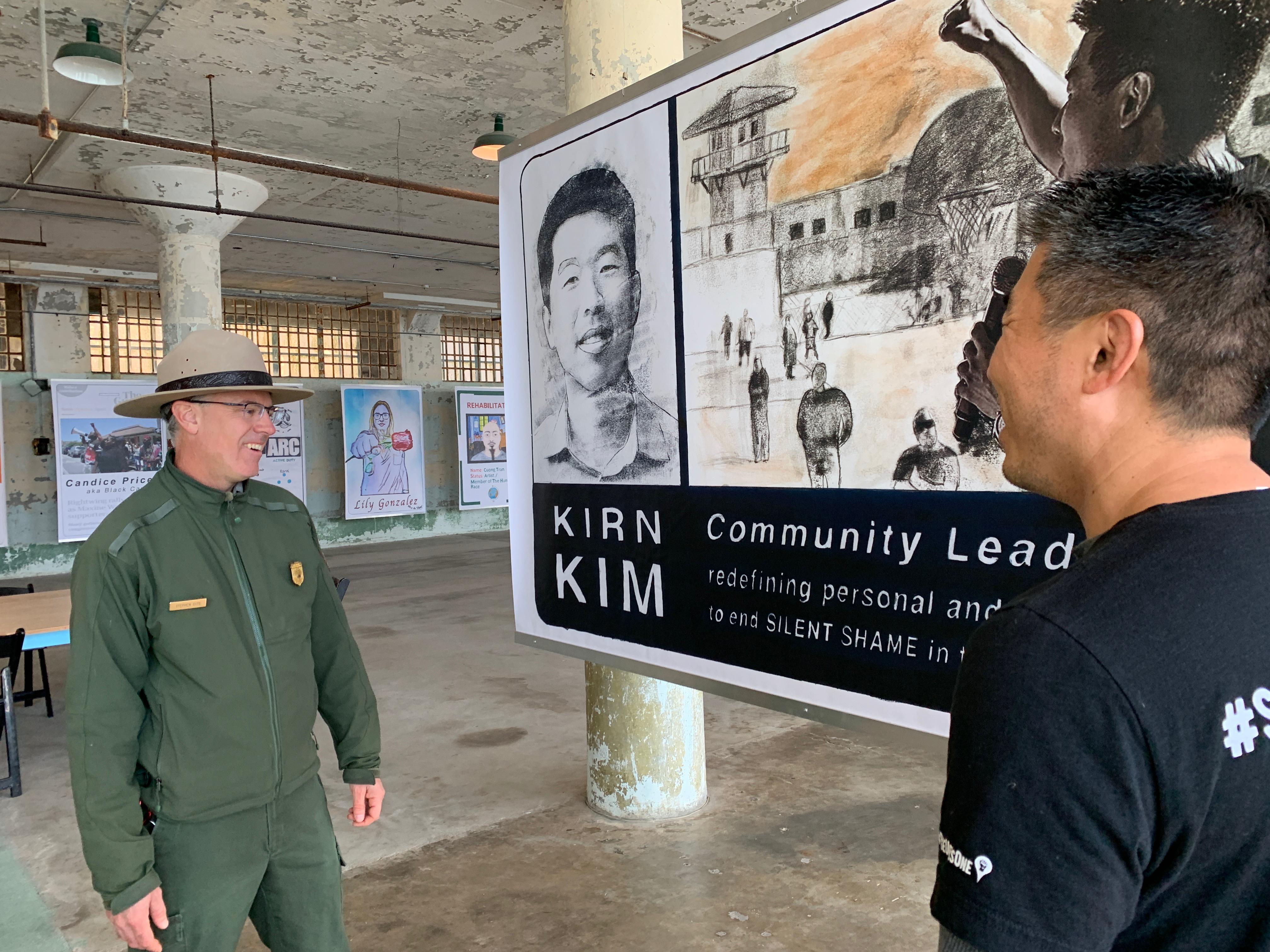 Kim now works at The California Endowment. As a teen he was involved in a high-profile case in Southern California and still can’t escape it, often literally, as the conditions of his parole restrict travel. Recently, he was at a car dealership in Southern California when the salesman casually mentioned the “dark years” at Kim’s high school.

Kim met Sale soon after he was released from prison. He was struggling with re-entry and everybody telling him to “just move on with your life.” He found it tough to just drop the last 20 years, and disrespectful to the family of the victim. Now he works to redefine stereotypes within the Asian-Pacific Islander community, where a conviction history is the ultimate taboo.

“People don’t understand how much this mass incarceration movement affected everyone,” Kim said. “Everyone automatically assumes that those who are affected by the system are the ‘others. That’s them, not us.’”

Like Kim, other members of the collaborative team are part of a growing network of individuals and organizations looking to reframe the narrative of re-entry. Dr. Luis Garcia says, “When you see the stats, you understand why.”  Though the United States has 5 percent of the world’s population, it has 25 percent of the world’s incarcerated people, and 95 percent of those people will be released. Of those incarcerated, people living below the poverty line and people of color are disproportionately represented.

Williams, who was once “just a number,” now uses research and data to help organizations that are trying to close prisons. When he came to San Francisco to see his own ID, featuring his current role as Director of Research at the Katal Center and Soros Justice Advocacy Fellow with Open Society Foundations, he had the same reaction many people have had to seeing their IDs at Alcatraz: awe.

“Some of the IDs are incredible, you can’t not be moved when you see those,” Williams said. “When I saw them, and I’m very in tune with what’s going on, I didn’t think ‘incarcerated person doing art.’ I just thought ‘artist.’”

Future IDs at Alcatraz is on display at the New Industries Building through October. Admission is included with your Alcatraz ticket. To book your ticket, visit AlcatrazCruises.com. For more on Future IDs, go to the Conservancy’s project page, GregorySaleArt.com, and FutureIDs.com.

Alcatraz
ArtArt in the parks